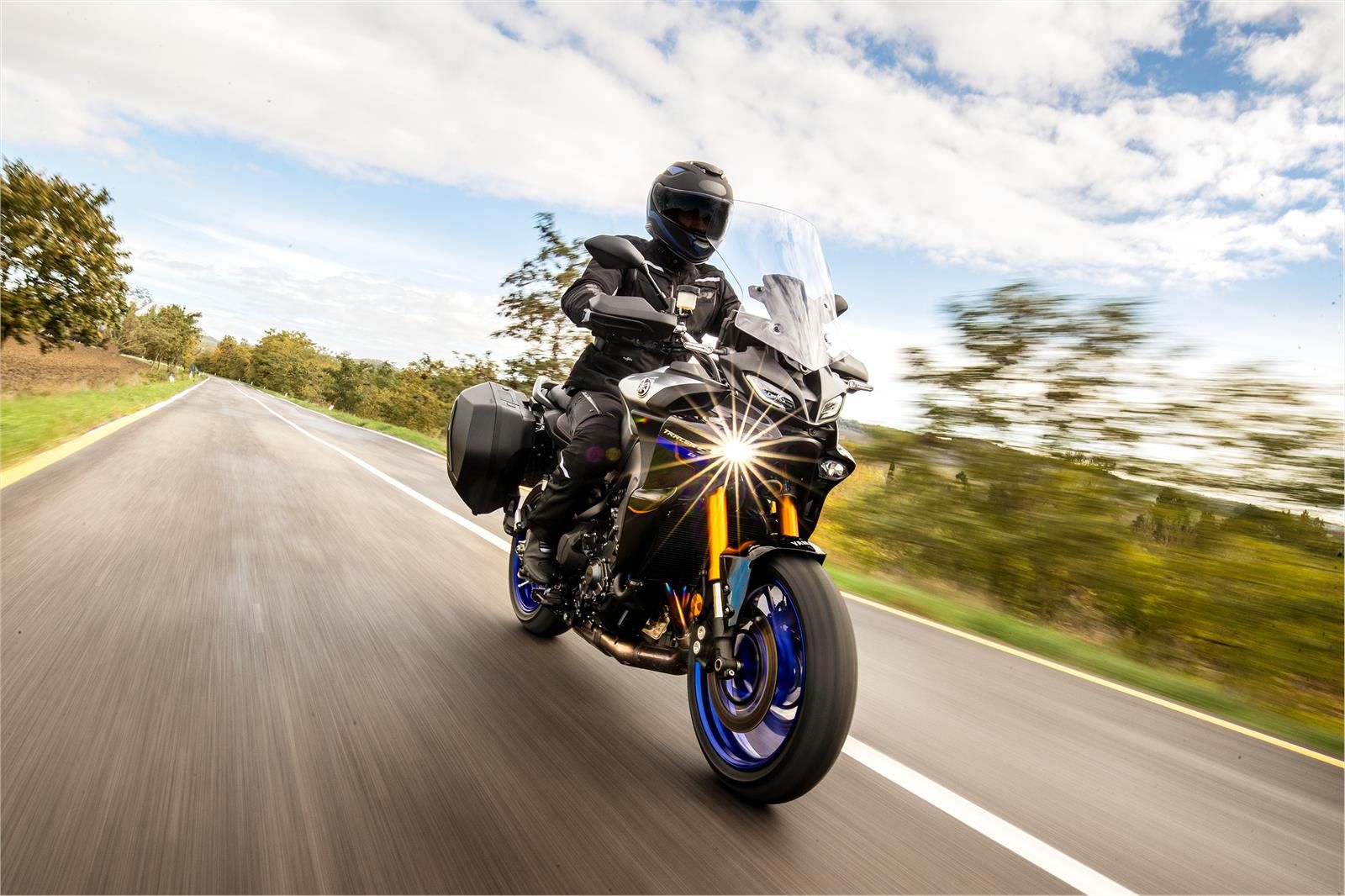 Beginner motorcyclists may find some of the biggest touring bikes too big and intimidating. However, this does not mean that beginners cannot purchase a touring bike or go on a long trip. Instead, they need to work their way up to these massive touring bikes. By starting smaller, lighter and with less power, they will be able to practice their skills and gain confidence. Then, when they’re ready, they can upgrade to a bigger, more powerful bike. These 10 bikes are perfect for beginners because they have just the right amount of power, storage and comfort.

Studio shot of a blue and gray 2020 BMW G 310 GS adventure motorcycle looking to the right against a white background.

This lightweight bike doesn’t look like a typical touring bike, but that doesn’t mean it can’t meet your needs. The 310 GS is the smallest and most affordable motorcycle in the BMW lineup. The little 313cc engine won’t win any races, but it’s enough to get you safely on the highway and over less aggressive terrain. This makes it perfect for getting your feet wet on more remote hiking adventures. One of the significant advantages of this bike is its total weight of 372 pounds. This makes it easy to throw the bike. It’s also a BMW, which means its build quality is impeccable.

The Versys is relatively new to the touring scene, but it’s already made a big impact. The 296cc liquid-cooled, flat-wing engine gives the bike plenty of power and stays true to Kawasaki’s roots as a sports bike manufacturer. However, since it’s tuned for the Versys and has a smaller size, beginners don’t have to worry about the engine overpowering them. One drawback of this bike is the high seat. Shorter riders will struggle to get their feet on the ground while riding this bike. However, you can lower the bike according to your leg length and it shouldn’t be a problem anymore.

On the subject: 10 Motorcycles with the Biggest Engines You Can Buy

Studio shot of a red 2021 Yamaha Tracer 9 GT sport touring motorcycle looking to the right against a white background.

This sport touring bike offers plenty of comfort with a padded seat and a large windshield. It also comes with the latest technology for convenience. The Yamaha Tracer 9 GT also comes with a semi-active suspension that smooths out the ride and makes riding on rough roads more enjoyable. It also comes standard with eight-gallon saddlebags. On the dashboard is a 3.5-inch display that is fully customizable with a comprehensive list of available information. One of the downsides of this bike is that it has a higher price tag than the other bikes on this list. This makes it more expensive for newcomers to enter the world of touring.

This sporty roadster is the least touring bike on this list. However, not all beginners can confidently say that they are ready to purchase a fully developed touring motorcycle. Triumph Tiger 660 allows beginners to plunge into the world of tourism without buying a bike that is only suitable for touring. Without the luggage, the bike looks clean and sporty, ready for a day of cornering or riding around town. Add luggage and you have a bike ready for long trips. If you decide you like traveling, there are plenty of other accessories available, such as additional lighting and heated grips.

Studio shot of a black and red 2021 Royal Enfield Himalayan Adventure Touring Motorcycle looking to the right against a white background.

Trust a fable trusted by experts. Appropriately named after the Himalayan Mountains, Royal Enfield Himalayan is tough enough to handle anything. It has a 411cc air-cooled single-cylinder engine, something to keep in mind when planning your trips. You don’t want to be stuck in traffic with this bike or it could overheat. The seat on this bike is lower than other adventure touring bikes, making it a good option for shorter riders. The overall weight of the bike is also light, making it easier to maneuver than full touring bikes. However, be careful when buying older used models. Early versions had some reliability issues that are not worth dealing with.

Studio shot of a 2022 Indian Super Chief Limited Black Touring Motorcycle in Black Metallic looking to the right against a white background.

The A Thunder Stroke 116 engine powers this lightweight touring bike it’s really more of a cruiser. Take a look at the overall styling and design and you can clearly see the cruiser influence. So what makes it a touring bike? Well, Indian has added some features. In addition to the big pipes and strong front tire, the bike comes with a four-inch touchscreen display that functions as a speedometer, tachometer, infotainment system, Ride Command system and navigation system. To give this bike some cred as a touring bike, it comes with standard Indian touring components in the form of floorboards, waterproof seat bags and a quick-release windscreen.

On the subject: Top 10 American Motorcycle Brands in 2022

The Harley-Davidson Heritage Classic touring motorcycle has attractive styling which doesn’t give off the typical “touring bike” vibe. Instead, it’s more like a bulkier version of a cruiser. If you’re only planning on doing the occasional long trip, this is the bike for you. Completely remove the floorboards, windshield and saddlebags. You’re left with a streamlined bike that’s perfect for riding around town. Plus, load up your bike and feel comfortable and confident on long rides. While not the most powerful Harley engine, the Milwaukee-Eight 114 engine has plenty of power for safe highway cruising.

With this bike you are ready to start your first adventure ride. KTM is an expert in off-road and sport riding, making the 390 Adventure the perfect bike for a beginner who wants to try it all. The bike is incredibly durable and durable enough for any ride you have planned. It also has plenty of road-ready safety features like ABS brakes and traction control. Although the motorcycle may seem small, the engine packs a lot of punch and power. As a result, you should have no problem keeping up with traffic on the highway. One thing to note is that the suspension is stiffer than other bikes, which can make for a more uncomfortable ride.

On the subject: Here are the 10 best Triumph motorcycles ever made

The Suzuki V-Strom 650 Adventure Touring Bike is perfect for both beginners and experienced riders. Its tall stance and large wheels make it ideal for off-road and dirt riding. The 650cc parallel-twin engine is just the right amount of power for a beginner. Although the V-Strom is heavier than comparable bikes. Suzuki is known for producing reliable motorcycles, which makes this a good choice. Although there is a smaller 250cc model, it won’t perform as well on the highway because it lacks the necessary power. Finally, add cargo boxes to your bike for plenty of storage space for longer rides.

This small touring bike comes with Harley’s most powerful Milwaukee-Eight 117 engine. This makes the Low Rider sporty and fun to ride and a good transition from a cruiser or sports bike into the world of touring bikes. It should be noted that the bike has a single seat and small folding bags. This limits the amount of things you can take with you. Still, there’s plenty of room for a single rider with a minimalist lifestyle. The styling is also a bit more aggressive and cool than what you’d normally see on a touring bike. This makes it versatile for riding around town, across the state or across the country.

Sales in Vietnam rose in March

Over 3,000 road accidents claimed more than 2,600 lives in Himachal in five years