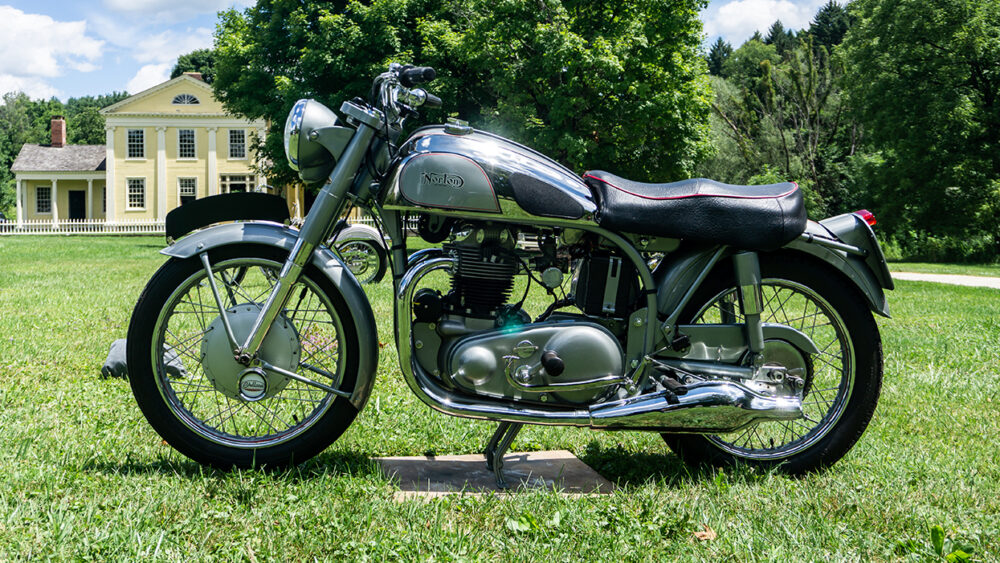 You can’t talk about motorcycle history without mentioning the British. That’s why every time we visit a motorcycle show, we like to find at least one or two British bikes to get a closer look at. Old Triumphs are hard to find, Vincents and Nortons even rarer. That’s why we were thrilled to see a vintage Norton stand out from the crowd at this year’s Fuel Cleveland Show.

Many people recognize classic Norton bikes by their iconic black and gold styling, so when we saw Stephanie Hronek’s silver metallic 1954 Norton, we weren’t sure what we were looking at. Hronek told us it was a Dominator 88 bike, a popular 500c twin-cylinder model in England that never made it to the states with any great frequency.

“This particular bike was a very difficult restoration,” she said. “A lot of the parts have come off over the years and it was completely wrecked when I got it. There are very few Norton shop records and manuals of the time, so I’ve tried to get as close to the original specifications as possible.’

There are a few qualities about the Dominator that set it apart from its big brother, the Commando. The dash is unique to the 88 where it has a large central speedometer, ammeter and light switch. Some of the parts, such as the exhaust system, are even available for reproduction from companies in England, which Hronek says are of very high quality.

The 497cc engine, designed by Bert Hopwood, was the same powerplant as the Model 7 Dominator that preceded it. The 360° vertical twin pusher in front of the block used cast iron cylinders and head. Ignition was by a magneto mounted behind the engine, and power for the lights was provided by a dynamo.

As for aesthetics, settling on a simple silver color was more difficult than it might seem.

“Even coming up with the color of the bike was quite difficult because there are no color codes anymore. And there isn’t much pattern left on the bike other than the road mount badge on the fork. There was just a bit of old paint that I could work off.”

Once Hronek found a good sample, she went to Axalta paint and chose a silver that best matched the original polychromatic gray. Under certain lighting, the paint will have a green or golden hue.

At the time, the striped and painted wheels and full chrome gas tank made the Dominator 88 quite a stylish bike, despite the fact that about 200 were produced each week. In comparison, the Dominator 88 sells for about 20% more than its rival, the Triumph Speed ​​Twin. The motorcycle was in production from 1952 until 1966 when it was replaced by the Commando.

If you have a motorcycle, ATV, quad, snowmobile, or personal watercraft that you would like featured in MPN’s Ride of the Week series, email MPN Content Director Greg Jones at [email protected]

Gorillas lay off half of the world’s workforce

The Ferrari SP51 is a new one-off V-12 roadster

What it takes for the W Series to bring a woman...