Spotted during testing in Austria of this next-generation prototype 1290 Super Duke R it seems not quite a new machine in which the chassis, suspension, wheels and even the tank and subframe are moved from the existing design. But visually the test mule seen here has a new headlight that already has an unusual design – it’s now KTM signature – and turns it into something even more radical.

Current KTM street models share variations of headlights, unlike anything else on the road, with a vertically separated, multi-component arrangement of headlights secured by LED boomerang-shaped ribbons. A recently spotted prototype takes this last element – LED running lights – and mutates them into completely separate parts that sprout from the sides of the headlight unit on winged profiled racks. It’s like Darth Vader’s TIE fighter Star Wars was transplanted to the nose of the motorcycle. The main headlight has lost its vertical central groove current designinstead with a pair of smaller, center-mounted lenses placed vertically with those racks emitting from them.

The headlight seen here is obviously still in the prototype stage. It lacks LEDs, which will definitely be installed along the front edge of the “floating wing” elements on the sides, while the main lenses look like ordinary spare parts, not the stylized blocks we’d expect to see on a ready-made motorcycle. . Regardless, the new look is obvious and potentially offers advantages over the existing installation.

By adopting smaller lighting units in the center and adding gaps to the exterior elements, KTM has reduced the visual volume of the design without losing the key elements that allow it to be identified immediately. In addition, the new design will be better suited to accommodate components such as radar sensors – technologies that the company has already adopted. Advanced radar is now standard 1290 Super Adventure Sbut it emerges from a cave-like tunnel drilled into the nose of the bike and doesn’t seem fully integrated. With this new design – provided it is used throughout the KTM range – such a sensor (or others like cameras could also be used as part of security equipment in the future) could be easier to hide.

The reduced visual mass of the prototype headlights is further emphasized by the new side panels extending from the fuel tank cap. The updated design makes the leading edge of these panels vertically parallel to the fork and extends further than the current bike. At the bottom, additional panels with the KTM embossed logo are now the sides of the radiator, protruding forward on the sides and overlapping the front tire. This is a visual trick that gives the bike a heavy front view, nose down. Combined with the existing stocky and high tail unit – now with a less intrusive license plate hanger – this effect makes the bike look aggressively crouched over the front wheel. Another more subtle style setting is the new dashboard cover, and turn signals now come out of this unit rather than attached to the sides of the headlight hood. Wheels, Brembo brakes, and WP All pendants look unchanged compared to the existing ones Super Duke Rwhile this version doesn’t seem to have a semi-active suspension new Super Duke R Here. 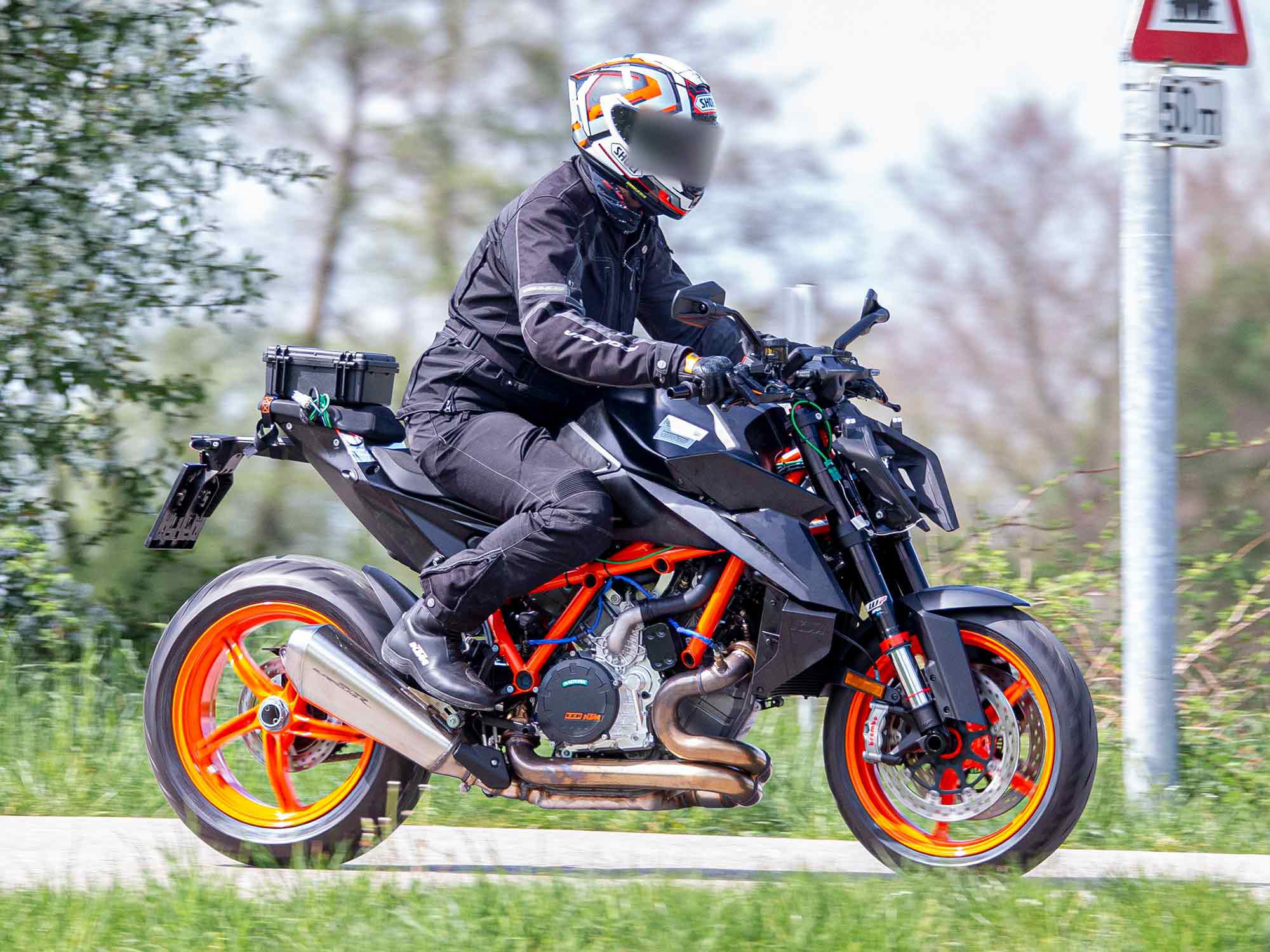 This prototype with devices has not only obvious changes in style, but also some more subtle changes that make us believe that it is on its way to the 2023 model. (Bernhard M. Höhne, BMH-Images /)

Mechanically, it’s hard to be sure of any specific changes, but additional sensors attached to the exhaust manifolds and wiring leading to a data recording packet tied to the tail show that there is. They suggest that KTM has made changes to the tune of the engine, at least, and is monitoring the exhaust to check the impact of those changes. The machined aluminum parts on the right side of the engine housing, including the water pump housing, appear to have been revised on this prototype, although the fact that the exhaust system, catalytic converter and muffler are portable components suggests that mechanical upgrades will be soft.

Given the limited nature of the changes, the likelihood that this bike will be ready for production as a 2023 model is likely to be officially unveiled by the end of this year.

The best accessories and gadgets for car enthusiasts