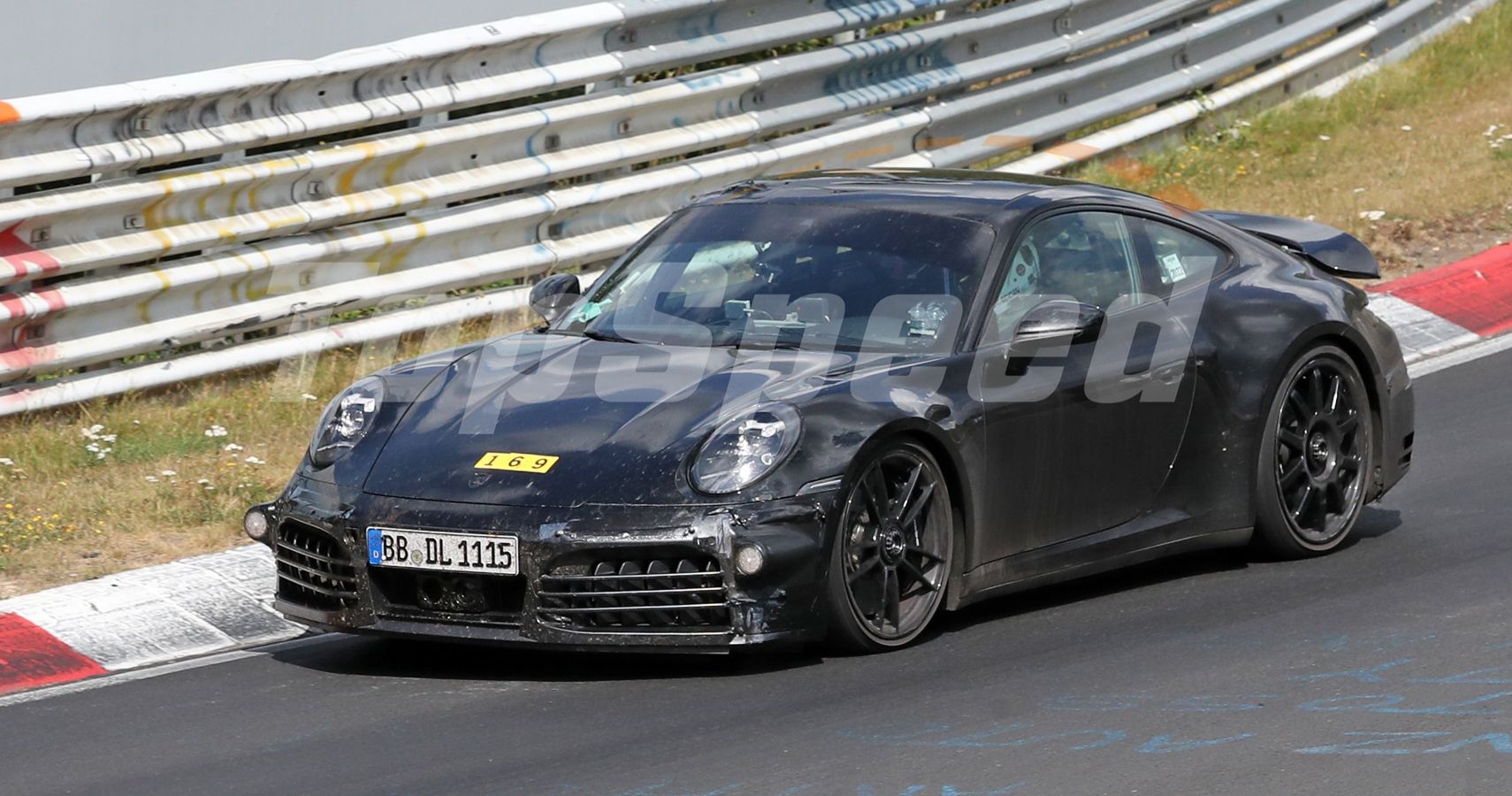 It looks like Porsche is offering a hybrid powertrain for the entire 911 lineup, and we’ve seen the GTS in action.

Testing the Porsche 911 GTS Hybrid at the Nürburgring

It’s been a few months Porsche is working on updating the entire lineup. Our spy photographers caught it each individual Porsche model is put to the test in different European countries. The 911 is of course one of them, and with a facelift, Porsche also offers a hybrid 911. If earlier in 2022. the standard 911 Hybrid was caught testing in low temperatures around Sweden, but this time our spy photographers caught a prototype 911 Hybrid testing around the Nürburgring. And this is no ordinary 911: look at the center-locked wheels and you’ll easily tell it’s a 911 GTS. Also, if you’re wondering how we know it’s a hybrid model, the answer is simple: it wears a round yellow sticker on the rear window.

The Porsche 911 Hybrid is not a PHEV

Porsche has done a great job keeping the future of the 911 Hybrid under wraps, but even so, we have a few details about it. First, the model will not be a true hybrid model, but it will borrow hybrid technology from the motorsport department and cars such as 919 Hybrid. it will be equipped with a very small battery, which will probably vary in size depending on the version of the 911. This decision should not come as a surprise, given that the company has stated many times that it will focus on performance rather than efficiency, but knowing Porsche, it will most likely combine both. Based on current spy shots, it appears that Porsche won’t offer the 911 Hybrid alongside regular models, but rather will bring hybrid technology to all models in the 911 range.

On the subject: Porsche 919 hybrid technology will be used in road cars

How much power the hybrid system will add remains a mystery. however, in a previous interview with TopGear, Porsche CEO Oliver Blume said the next 911 Hybrid will be “the most high-performance 911 ever.“Of course, we have no idea what that means, but considering The 911 GT2 RS delivers 690 horsepower, the next 911 Hybrid should deliver at least 700 horsepower – in its most powerful iteration. We remind you the current 911 GTS is offered with a 3.0-liter twin-turbo six-cylinder engine which delivers a total of 480 horsepower and 420 lb-ft of torque. That means if 700 horsepower is the number Porsche is aiming for, there must be another, more powerful 911 Hybrid. As the official debut of the facelifted 911 nears, we expect to hear more details about the 911 Hybrid’s powertrain.

On the subject: Electric Porsche 911 – The secret lies in solid-state batteries

Rumor has it that the facelifted 911 will be introduced sometime in late 2022 or early 2023. That means the hybrid version should arrive in a few months, with sales starting in time for the 2024 model year.

Prototypes of self-driving cars Argo AI fully work without a driver in 2 US...