Honda is gearing up to overhaul its driver assistance technology known as Sensing 360. It first introduced Sensing 360 in the US in 2014, adding it to the 2015 CR-V and giving the 2015 Acura TLX its own version called Acura Clock. Honda today announced a plan to expand the technology across the Honda ecosystem. The next generation of Sensing 360 will start appearing in China in 2024 and in the US sometime in the second half of the decade, before becoming standard on all models by 2030.

In April 2021, Honda CEO Toshihiro Mibe announced Honda’s goal of achieving zero fatalities in traffic collisions involving Honda vehicles by 2050. The new Sensing 360 technology increases the range of sensors around the car. It will also feature new technology that will detect abnormal conditions in the driver or the vehicle’s surroundings and act if necessary to avoid a collision. The system will also be able to stop the vehicle if the driver does not respond to a shift request when the vehicle is in hands-free driving mode. Like other automated systems, if the driver does not respond to repeated warnings, the vehicle will flash its lights and honk while stopping in its lane. 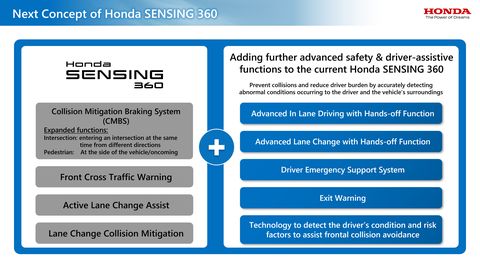 The company is also releasing its next-generation Sensing Elite technology, which will use artificial intelligence (AI) for hands-free driving and tasks such as automatic parking or taking the car out of a home garage. Honda did not provide any details on the release of the upgraded Sensing Elite, but said that the artificial intelligence is growing and learning from experience to improve over time.

Hyundai is introducing the new base variant of the Alcazar at a price of...

2023 Volvo V60 Cross Country B5 goes against the crowd

All-black versions of the Bajaj Pulsar N250 and F250 have been released. Check...

Toyota is considering a compact pickup. But there is a snag …