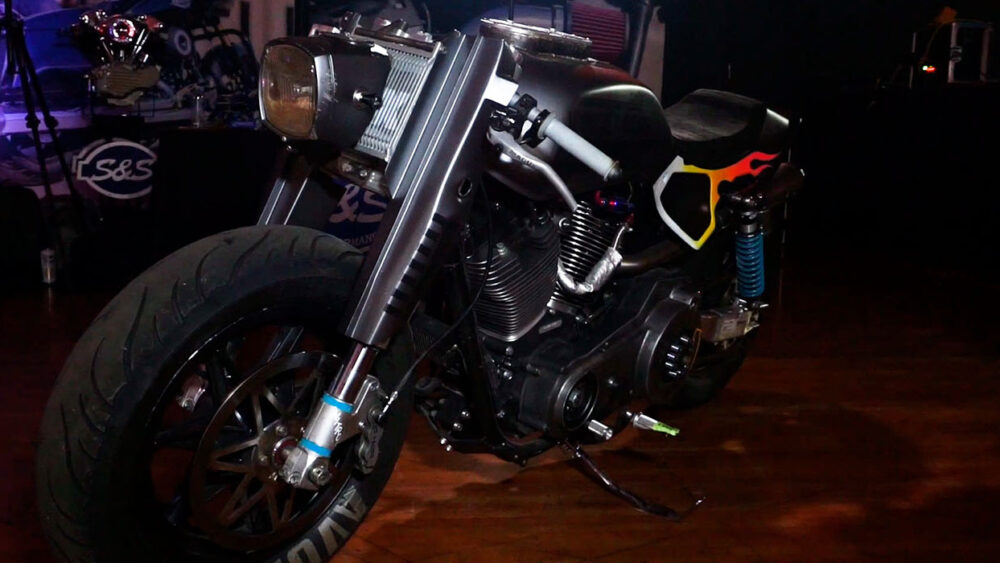 The best part of an individual build is often the confusion at first glance. Particularly amazing assemblies with a mismatch of different parts from different manufacturers make the identification process more like a puzzle, and when each piece is put together, you end up with something great.

Passing by Mama Tried, we came across Devin Virtanen, brand manager Motorsport icon. Icon – one of the leading brands of protective clothing for motorcycles, which produces detailed and stylish helmets, jackets, gloves, pants and shoes. The facility in Portland, Oregon, is also building a number of individual motorcycles with the help of its many partners. Virtanen gave us a closer look at the “Homemade Sin,” the non-standard Harley-Davidson Dyna S&S T124 Black Edition.

“It’s a marketing tool,” Virtanen says. “We create these things and all the famous motorcycle sites want to show them. Icon One Thousand is what we call the kind of boutique we make in our office with all the individual builds. ”

This time Icon took care of its build by including a number of interesting additions. Assembly began with the 124-inch black edition V-twin engine provided S&S Motorsports which is in the standard Harley-Davidson Dyna frame. The coolest addition should be the Ducati front end with a wide sliding triple front end, which was an option for the Monster 900 back in the 90s. In the case of Monster forks there are covers and gondolas from Honda Dream of 1969 release.

Mixing and combining different components of different eras gives the motorcycle a very unique look; Virtanen admitted that Icon is known for specializing in “weird” builds.

“We have Nitron shock absorbers behind because these guys have helped us a lot with our builds,” he says. “We told them what we were doing and they used to come up with weird ideas. But in general, when we finish construction, everything must be done.

“The Roaring Toys have created for us this beautiful turning arm in beast mode. Speed ​​Merchant put a few pegs. It has its own exhaust with S7S mufflers and a few more S&S things on the side, as well as a Honda CB900F tank with dual filters.

Because of all the weird additions, the regular tail from the aforementioned Honda didn’t fit on a motorcycle. Virtanen and team fixed the problem on their own by printing their own tail and fiberglass from the inside to protect it from destruction.

The bike also has a BDL belt drive, custom cover, EBC brake rotors and Vintage Abe wheels. The bike, of course, acquired a taste, but all together it is quite an exciting package. To add even more weirdness, the Icon team has installed a lighter and ashtray in the front bucket, which is Virtanen’s favorite part.

“You never know when you’re going to need this little Marbie Red.”

If you have a motorcycle, ATV, UTV, snowmobile or jet ski you want to show in the MPN’s “Trip of the Week” series, email MPN Content Director Greg Jones at [email protected]

Wait until Tesla’s self-driving cars are longer, safety is the first priority