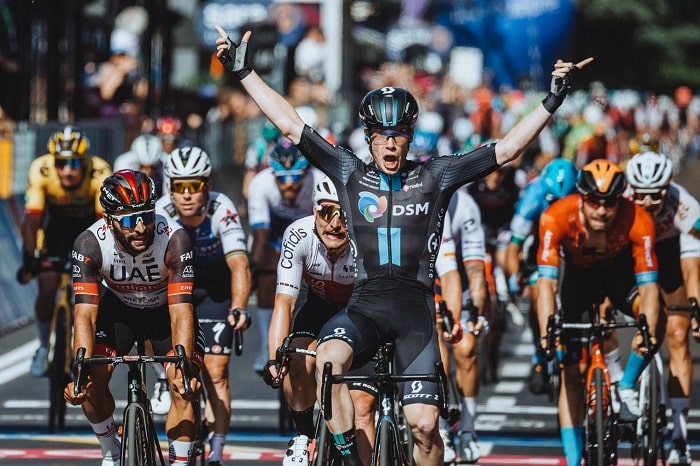 Alberto Dainese (DSM) became the first Italian winner this year Gira d’Italia when he surpassed the sprint to reach stage 11 in Reggio Emilia on Wednesday.

You can review STEP 11 HERE

Danes, who had never won a stage in the Giro before, defeated Fernando Gaviria in a jerk at the finish. Another Italian Simone Consoni took third place.

Juan Pedro Lopez (Track-Segafred) retained the pink jersey of the leader after the 203-kilometer stage, which was relatively comfortable apart from the heat and wind.

Richard Karapas, however, got three extra seconds in the intermediate sprint to climb two places to second place, equal in time to Joao Almeida, trailing Lopez by 12 seconds.

Benjamin Girmai, who on Tuesday became the first black African to win the stage at the Jira, dropped out before the start after a crash on the podium after his victory. During the celebration of the historic stage victory, the unfortunate Girma was hit in the left eye by a cork.

At a temperature of up to 30 degrees, the peloton largely stuck together, with the exception of one desired separation of Luca Rostelli and Philippe Tagliani, which was wound just after halfway.

In the sprint Arno Demar, who already has two stage victories in this Jira, attacked from depth.

He was hunted by Gaviria before Danes, taking full advantage of the current, won the third victory of his career.

Last year, he finished second on the Vuelta stage, losing to Fabio Jacobsen.

Pelaton faces the longest day in the saddle on Thursday with the mountain Stage 12 204 kilometers, which crosses the Apennines from Parma to Genoa.

By 2035, California will ban the sale of new cars with gas engines

The VinFast line of electric SUVs has landed in Paris, ready to conquer Europe