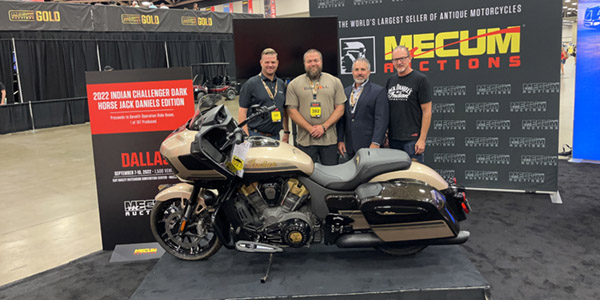 In 2016 Indian motorcycle and Jack Daniels Tennessee Whiskey has created the ultimate partnership to celebrate American craftsmanship. Each year, two American originals are auctioned #001 from that year’s collection to support Armed Services YMCA (ASYMCA) and his Operation Ride Home. a program that helps active-duty US military members travel home to visit their families. This year, the 2022 Jack Daniel’s Limited Edition fetched $55,000 at Mecum Auctions in Dallas, Texas. In total, the annual auction raised more than $400,000, helping connect more than 10,000 service members with their families during the holidays and in times of need.

America’s first motorcycle company and America’s first registered distillery have teamed up to produce an annual limited-edition motorcycle collection that embodies world-class innovation and craftsmanship. The partnership was created to bring together two of America’s most iconic brands that share a mutual commitment to independence, originality and American craftsmanship that dates back more than a century. In mutual respect for the US military, Indian Motorcycle and Jack Daniel’s are keeping the #001 motorcycle from each collection and auctioning it off, with all proceeds benefiting ASYMCA’s Operation Ride Home program.

“Partnering with Jack Daniel’s has been nothing short of amazing,” said Aaron Jacks, vice president of Indian Motorcycle. “As two of America’s most iconic and recognizable brands, we naturally share several core values, including our passion and respect for the U.S. military. We are proud of the platform our partnership with Jack Daniel’s has provided as we directly support the men and women who serve our country and help connect them with their families during the holidays.”

“Since the inception of Operation Ride Home with ASYMCA in 2011, our mission has been to support junior military members who lack the financial means to connect with their families at important times of the year,” said Greg Luers, Director of Sponsorships and Partnerships for Jack Daniel’s. “Our partnership with Indian Motorcycle greatly expanded the reach of the program as our annual auction of motorcycle #001 was one of the leading contributors to the total funds raised for Operation Ride Home.

“Jack Daniel’s is a long-time sponsor of ASYMCA and we are very pleased with their continued support,” said Bill French, CEO of ASYMCA. “Thanks to Operation Ride Home and donations from this year’s auction, we expect to be able to connect approximately 2,000 service members with their families for the holidays. A big thank you to Jack Daniel’s and Indian Motorcycle for their continued support of our mission.”

For more information about Operation Ride Home or to make a tax-deductible donation, visit OperationRideHome.com.

2022 is probably my most enjoyable F1 season

Surfshark VPN for Linux gets a groundbreaking new feature