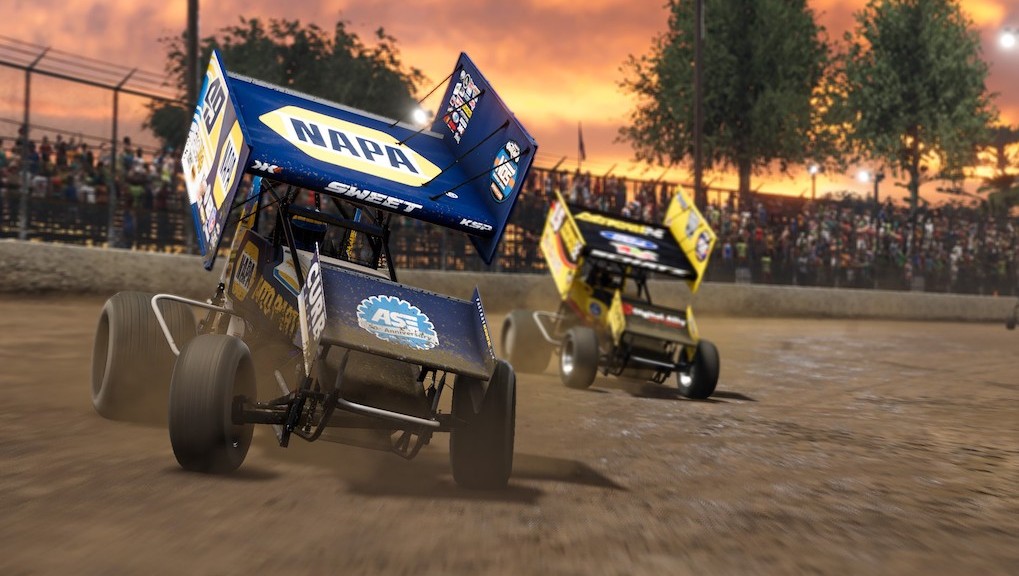 When iRacing announced its acquisition of Monster Games in early 2022, it touted the prospect of expanding its reach into simulation racing and gaming. Eight months after the partnership was unveiled, the first product hit the market, a major milestone for the company behind one of the leading racing sims.

For Monster Games, “World of Outlaws: Dirt Racing” is another release in the history of producing console racing games, but for iRacing, it is the brand’s first foray into the console market.

Monster Games had already been developing the product for eight months when it was acquired by iRacing last December. This led to what Steve Myers, iRacing’s executive vice president, called a “hybrid project” about halfway through the game’s production.

Myers told RACER that while he’s excited for this game’s release, he’s just as excited about the future prospects and titles that may be on the horizon as iRacing finds its footing in the console gaming market.

“I’m really excited to see how the game looks, but I think it’s been a trial by fire in a lot of ways,” Myers said, explaining that iRacing wanted to learn as much as possible about the development process for Monster Games’ console game, adding its own improvements to prepare to future releases.

What those future releases will be remains to be seen, but Myers noted that the company is exploring a NASCAR title. Monster Games created the NASCAR Heat series before the NASCAR license went to another studio after 2019.

“I think it’s too early to tell,” Myers said of the next title. “I think we started kind of kicking around ideas. Obviously, our customers are bothering us about making a NASCAR title, and that’s something we’re definitely looking into. But I don’t think we’ve made any final decisions yet about what we want to do with (Monster Games).”

All handling development for World of Outlaws: Dirt Racing was done using a traditional handheld controller.

“You can’t create a simulation where 95% of customers will use a gamepad, that’s just not realistic,” Myers said. “I think that anybody in the console industry that tries to say they’re making a ‘sim’ is not entirely true because you just can’t do the same thing by building a product around a gamepad as you can when you’re building a product around a steering wheel and pedals.

“With Orontes (another game studio acquired by iRacing in 2021) and Monster, we can create a product that is completely focused on racing fans, but is much more accessible and can be played with your kids. It’s something that hopefully people who aren’t even into racing can try these games and get to know something that they really enjoy.”

One of the new challenges iRacing had to face when releasing the game was establishing a working relationship with Microsoft and Sony on whose consoles the game would be available. Myers explained that iRacing has, in a sense, spoiled itself by being able to quickly update its own independent products.

The game was sent to Microsoft and Sony a month before the planned release date so that it could be approved for sale in the companies’ stores. Any post-release game updates must also be sent to the two before they become available.

“I’m still new and learning how the space works, but from what I understand, once you’ve passed the first release and whatever your day one patch is, you’re moved to where the product is now considered stable.” he said.

“Apparently there is a faster process to remove patches, but it’s not as fast, obviously, as we can do in iRacing.”

Monster Games is handling this part of the game’s release.

The World of Outlaws series visits more than 50 tracks across the country, many of which are independently owned, making licensing difficult. iRacing and Monster were able to acquire licenses for 14 of them, all but two of which are available from iRacing.

The result of iRacing and Monster’s collaboration is a game that seems well-suited to the market it aims to attract. Driving is challenging enough to keep experienced players satisfied, while plenty of difficulty sliders allow new players to tackle the game on their own terms.

The career mode is long and allows drivers to advance through the dirt racing ranks, improve their car’s performance, attract sponsors and customize their car’s design. Events include a practice session, qualifying, heats, B-mains and the main event that add substance to the weekend.

For a game that was half Monster and half Monster/iRacing, World of Outlaws: Dirt Racing delivers. It doesn’t reach the level of perfection that games like F1 22 achieve, but for the first product of a new relationship with a much smaller market, it’s a more than respectable depiction of the world of dirt racing.

I’m excited to play World of Outlaws: Dirt Racing, but like Steve Myers, I’m eager to see what other projects are on the horizon as Monster Games and iRacing bring their unique experiences to racing fans’ consoles in the future.

This Microsoft 365 phishing campaign uses some slick US government bait

Honda vehicles manufactured after 2012 may be vulnerable to hacking the key fob that...

Mahindra Scorpio-N is described in detail as a durable SUV from India for 15...