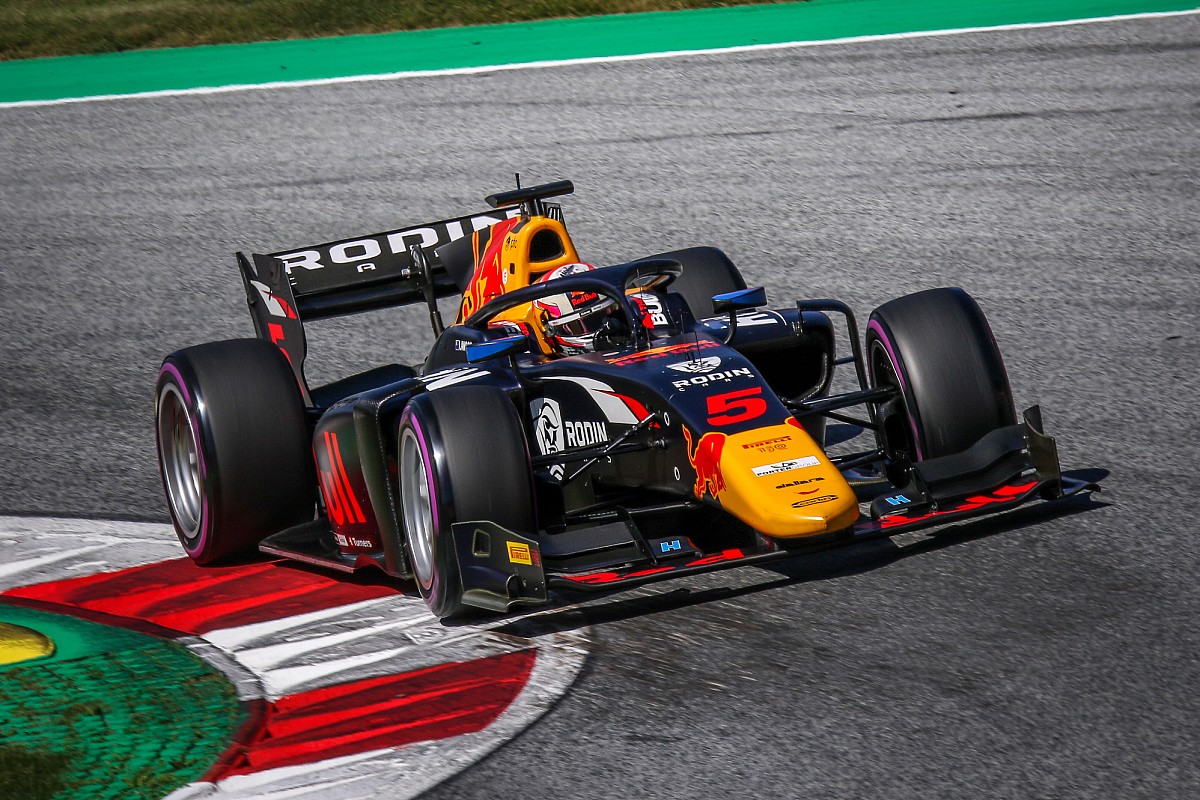 The Carlin driver made a fine start from the line in fifth heading into Turn 1 to take second place before pulling away for the lead in Ralph Boschung on the second lap on the straight Kemmel.

By lap 11 he had extended his lead to 4.7 seconds before the race was neutralized by a safety car brought on by a teammate Logan Sargeant crashed out of ninth at Puhon after losing the rear end on the way out.

​​​​​​​Despite expressing concern about his tires after five laps, the Red Bull junior driver, who competed in Formula 1 FP1 for AlphaTauri on Friday, held off Boshung on the restart before crossing the line 3.8s ahead Jack Duane.

Racing CompassBoschung, who returned to Formula 2 after three races due to injury, claimed third place in his second podium of the season.

Boschung led from the line to finish second Jahan Daruwala was forced to stop a lap before the starting grid, leaving the championship contender Theo Purchet to start a de facto second for ART.

Despite a good start, Lawson got the better of Boshung on the second lap, with Richard Verschoor ran third, beating Purscher off the line.

Doohan, who started seventh for Virtuosi Racing but moved up to fourth on the second lap, then closed in on Verschoor, flying past Kemmel on the sixth straight.

Purchet tried to repeat the move on the next lap with his title challenger Felipe Drugovich was not far behind him, but was forced to hold on to fifth place.

A lock from Purcher on the eighth lap brought Drugovich close, while at the front Doohan held off the three behind by two seconds.

The safety car on lap 12 prompted an unexpected pit stop for Drugovic and several other riders who ran on, leaving the Brazilian in 12th on fresh soft tyres.

He immediately began to make his way through the field, although he was held up on his first lap after being pushed into the gate by Yuri Whipps, and is under investigation for leaving the track and getting the lead.

Drugovic passed the Hitech rider at Stavelo before moving up a further three places on the same lap, overtaking Enzo Fittipaldi (Sharuz), DAMS driver Ayumu Iwasa and finally David Beckmanfinishing seventh after just one lap on the soft.

He passed on the next lap Marcus Armstrong (Hitech) at La Source in sixth before passing Pourchaire at the chicane in fifth.

Although he overtook Verschoor on the final lap to take fourth, he was unable to complete his podium finish but will start from pole for Sunday’s special race.

On the last lap, Doohan finished second to Boshunga to claim his fifth podium of the year.

Purscher finished sixth, while Armstrong and Beckman finished seventh and eighth to round out the points.

The result of the F2 Spa Sprint race is 18 laps

The next generation of cabs will be controlled by software