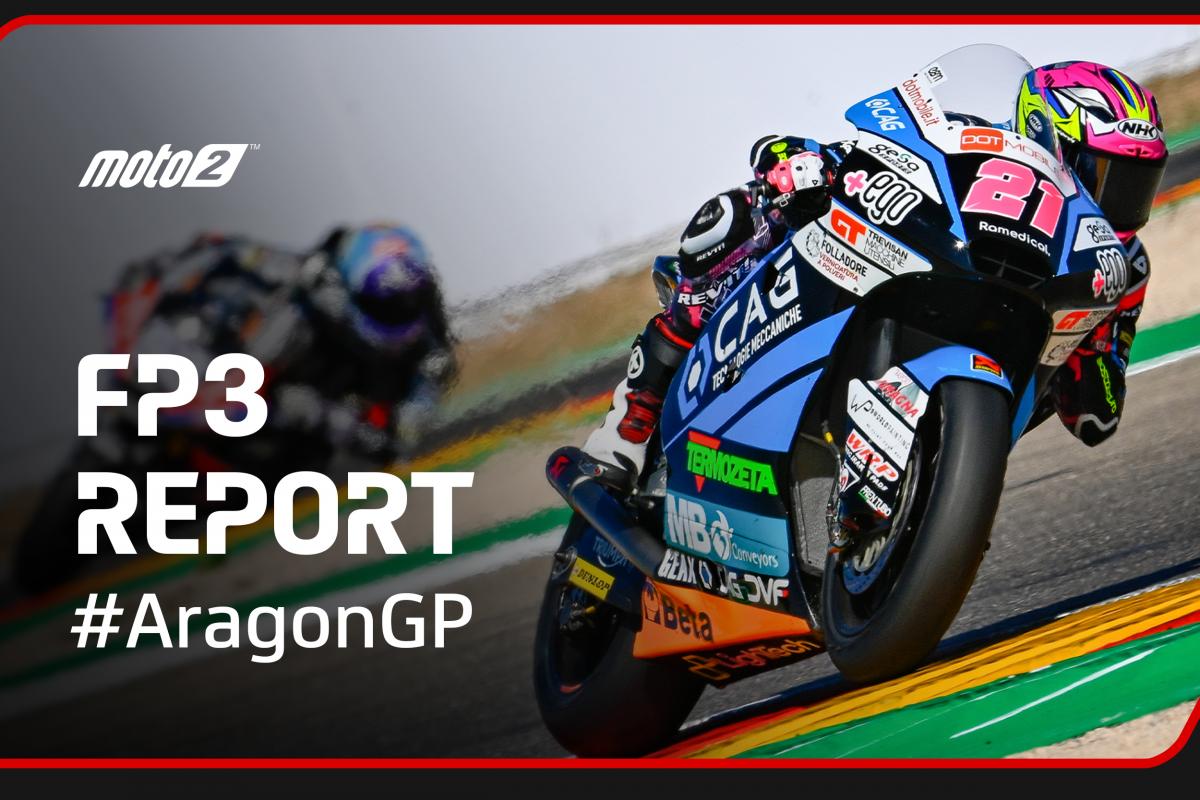 Alonso Lopez (CAG Speed ​​Up) set the FP3 pace for the Moto2™ class at the Gran Premio Animoca Brands de Aragon. Having won two weeks ago at Misano, the new Grand Prix winner is back on top of the timesheets after clocking 1:52.180 at MotorLand Aragon on Saturday morning. World Championship leader and future MotoGP™ rider Augusta Fernandez (Red Bull KTM Ajo) finished second in the session ahead of Aron Kahne (Flexbox HP40). Former Championship leader Celestino Vietti (Mooney VR46 Racing Team) crashed out of Q2, then switched on, then crashed out again, all within minutes of the checkered flag, and will need to move from Q1 if he is to challenge for pole position – as will Ai Ogura (Idemitsu Honda Team Asia).

The four leaders are separated by less than a tenth

Lopez was sitting in 10th as drivers staged time attacks in the final minutes of FP3, so he may well have been nervous about going into Q2 before he fired in his 1:52.180. However, the 20-year-old must have thought he had more in him because as soon as he crossed the line to set that lap time, he was expressing his frustration that Marcos Ramirez (MV Agusta Forward Racing ) went into Turn 1 and causing a yellow flag, meaning that Lopez’s next lap would not count. It didn’t matter in the end, as previous sprinter Fernandez stayed second with his 1:52.267.

At one point, just 0.009 seconds separated Red Bull KTM teammates Ajo Fernandez and Pedro Acosta, and that was the case at the end of the session. However, Kahnet – who cleared himself of a crash at Turn 2 at the halfway point – split them at the checkered flag, setting a 1:52.269, meaning it was a top four lap covered by less than a tenth of a second. Toni Arballino (Elf Marc VDS Racing Team), who was the first to overcome Friday’s Kahnet test, finished fifth with a time of 1:52.413 by the end of the session. Jake Dixon (Shimoku GASGAS Aspar Team), Fermin Aldeguer (CAG Speed ​​Up), Joe Roberts (Italtrans Racing Team), Jorge Navarro (Flexbox HP40) and Albert Arenas (Shimoku GASGAS Aspar Team) round out the top 10.

Bo Bendsneider (Pertamina Mandalika SAG Team), Somkiat Chantra (Idemitsu Honda Team Asia), Manuel Gonzalez (Yamaha VR46 Master Camp) and Philippe Salak (Gresini Racing Moto2™) have also reached Q2. Making life difficult for world championship contender Oguru, he was first outside just 0.048s slower than Salak. Then there was Vietti, who was only 24th before jumping to 13th at the checkered flag, 14th when Gonzalez crossed the line in his slipstream, then dropped back to 26th when he lost lap time for violating the track limit at turn 13 – bad luck for the man on bike #13 this time.

The next Volkswagen Tiguan and Atlas will get more powerful engines

What to say? The 2023 Acura Integra contains an Easter egg for the...