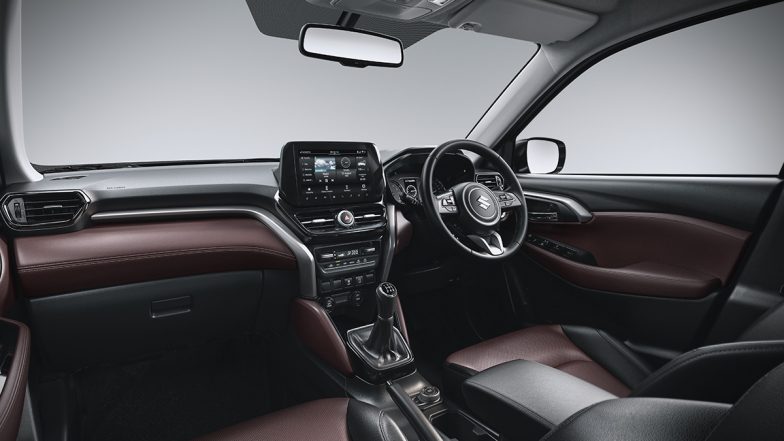 New Delhi, October 31: Maruti Suzuki India on Monday said it is expanding the CNG fuel option for cars sold at its premium dealership network Nexa as it plans to increase sales of CNG vehicles by nearly 75 per cent at 4 lakh units this fiscal.

The company is introducing an ‘S-CNG’ option for its premium hatchback Baleno and multi-purpose vehicle XL6, priced between Rs 8.28 lakh and Rs 12.24 lakh, according to Shashank Srivastava, senior executive director, marketing and sales. The 2022 Maruti Suzuki Grand Vitara is priced at Rs 10.45 lakh in India.

“This year, we are expected to sell around 4 lakh CNG vehicles compared to the 2.3 lakh vehicles we sold last year,” Srivastava said during the call. According to him, since the introduction of CNG technology in 2010 in three models, Eeco, Alto and WagonR, the company “has sold 1.14 million CNG vehicles so far”. Maruti Suzuki India, Toyota Kirloskar Motor recall over 1.41 lakh units to replace faulty fuel pumps

“Today, we have 10 of the 16 models (the company sells) that have CNG,” Srivastava said, adding that with the two new models, MSIL’s CNG offering will rise to 12 models.

As for the Baleno and XL6 CNG variants, he said production has already started and “we will start sales in the first week of November”. The Baleno S-CNG will be available in two variants. The Delta with manual transmission (MT) will be priced at Rs 8.28 lakh and the Zeta (MT) at Rs 9.21 lakh, while the XL6 S-CNG will only be available in the Zeta (MT) variant at Rs 12.24 lakh ( all prices excl. showroom).

According to him, the introduction of LNG vehicles in the Nexa channel is something that he said MSIL has been discussing internally for a long time, but based on the research done on Nexa customers, it has decided to introduce the option.

“They noted that it’s not only about operating costs, but also that LNG is a very clean technology,” Srivastava said. When asked about the sales expectations from the two new CNG variants, he said, “Nexa normally contributes about 20 per cent of Maruti Suzuki’s total volumes. However, CNG was not present in Nexa. It is now coming to Baleno which is around 60%. percentage of total Nexa volumes. So I would expect a good percentage of Baleno S-CNG volumes.”

Citing the example of the company’s other popular hatchback, the Swift, on which it introduced the CNG option in August, Srivastava said the penetration is currently around 14-15 per cent and the Baleno CNG is expected to see a similar level.

Regarding the overall demand for CNG vehicles, he said that last year the average number of bookings per day was around 1,300-1,400 and in the first quarter of this financial year, it increased marginally to 1,400-1,500.

“After the increase in LNG prices, it has returned to the same level as last year, which is around 1,300-1,400 per day, and it has remained unchanged,” Srivastava added. Regarding the backlog of LNG vehicles, he said, “As of today, the outstanding bookings for LNG vehicles are around 1.23 lakh units.”

Non-availability of the CNG controller semiconductor along with some other technology-related components has led to a long waiting period for the CNG vehicles, ranging from a week for the WagonR CNG to around eight-nine months for the Ertiga CNG, which has the highest order of 72 000 units. , he added.

Electric cars won’t overload the power grid — and they can even help modernize...