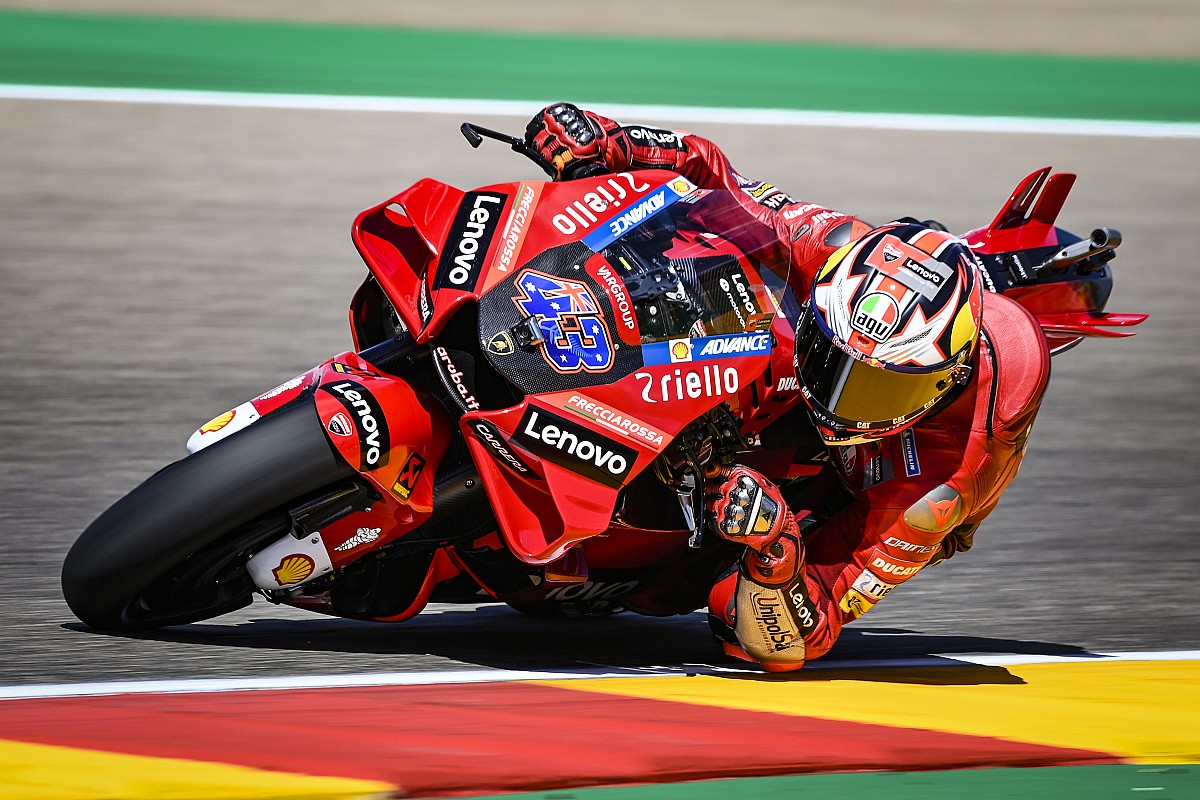 Marquez made his long-awaited return to the Grand Prix on Friday after a 110-day absence while he recovered from a fourth major operation on his right hand.

After finishing eighth overall on Friday, Marquez admitted he was likely to “suffer” the race due to his physical condition and had yet to find his true limit as he had not crashed.

Marquez made a cash frontal save coming through the penultimate corner looking like his old self with just under 10 minutes to go in FP3.

But he went over the mark midway through the 45-minute session when he crashed at Turn 7. After being able to rejoin the session, Marquez could only manage 12th under the checkered flag.

Cooler conditions Saturday morning in Aragon meant there were only a few changes to the overall timesheets, and no major changes.

Ducati VR46 rider Marco Betseki topped the FP3 individual timesheets after 10 minutes with a time of 1min 47.955s, which was only good enough for 14th overall.

Mir – who after Friday wasn’t sure his weekend in Aragon would last much longer as he struggled with the ankle he broke in Austria – made his first significant improvement in the overall with about 23 minutes to go.

The Suzuki driver moved up to ninth place with a time of 1m47.763s, which made him the fastest in the individual standings.

It happened only in the last 12 minutes Jorge MartinFriday’s time was finally surpassed by a factory Ducati rider Jack Miller from 1m46.992s.

His teammate will put pressure on Miller’s circle Francesco Bagnaia at the death, but the Italian missed out on second place by just 0.030 seconds.

A flurry of yellow flags for various crashes wreaked havoc on those setting up the final flying laps to try and grab a spot in Q2 for qualifying later today.

However, several riders managed to sneak in here along with Beceki and Grezini Enea Bastianini making late jumps to fourth and fifth.

Martin was fifth overall, ahead of the Rapid KTM duo Brad Binder – who crashed late at turn 2 – and Miguel Oliveirawho was ahead of the championship leader Fabio Quartararo factory Yamaha eighth.

The last places in Q2 went to LCR Honda Takaaki Nakagami and Suzuki Alex Rins – who also had a late failure, but late improvements by Bececa and Bastianini came at the expense of Aprilia Aleix Espargaro.

The rider, who finished third in the championship, was expected to be strong in Aragon, having enjoyed some of Aprilia’s previous best results at the Spanish circuit in recent years.

But he would face Q1 missing out on a top-10 finish by 0.049s to Marquez, whose final lap was hampered by a mistake at Turn 1.

Neither Aprilia rider made it into Q2 as 17th-placed Maverick Viñales failed to improve on his best result on Friday.

Promatsa Johann Zarko will also join a shaky Q1 session later today after he was 15th at the end of FP3, with Mir dropping to 19th at the end.

Crashes for the RNF duo of Darrin Binder and Cal Crutchlow retired in both 21st and 23rd, with Honda’s Pol Espargaro sandwiched between them.

Need to focus on ‘proper weekend’ in New Zealand, not WRC title

Kia is recalling 257,998 Optimas due to insufficient adhesive

Need to focus on ‘proper weekend’ in New Zealand, not WRC...