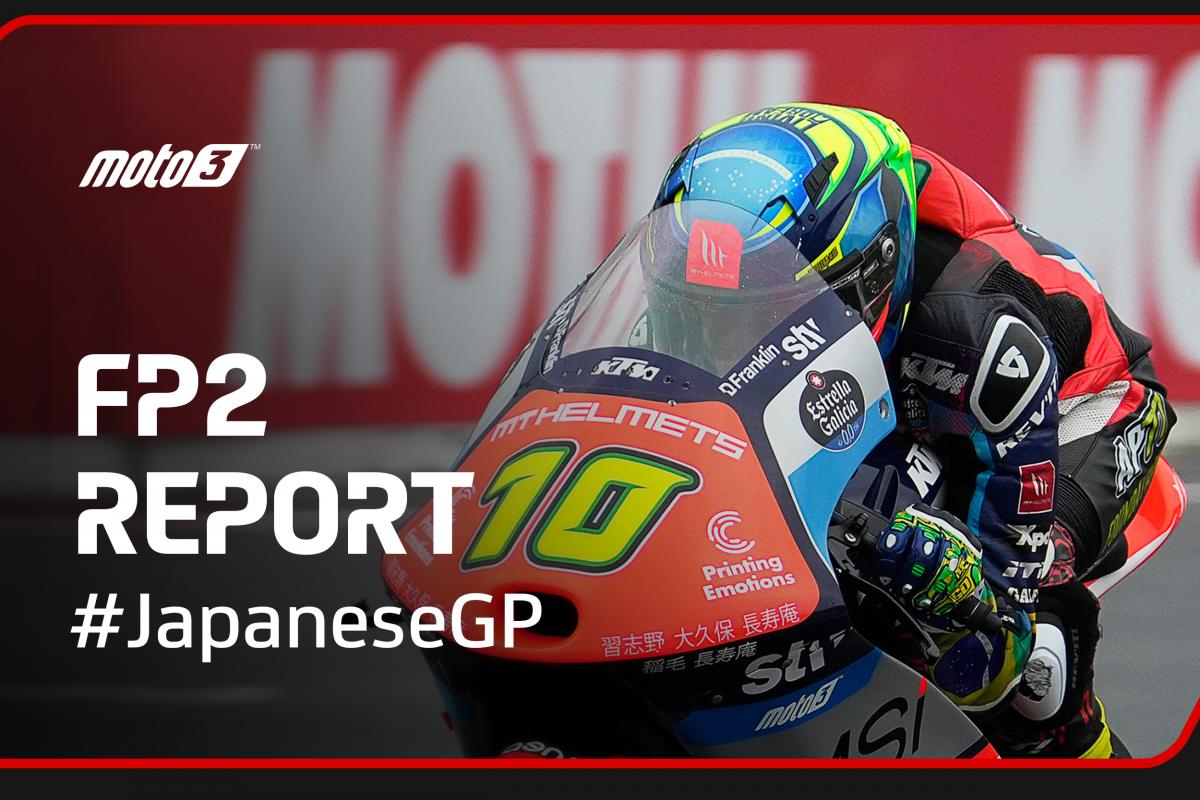 Diego Moreira (MT Helmets – MSI) remains fastest overall after Leopard Racing’s Dennis Foggia set the best lap in the wet FP2 session for the Moto3™ field at the Motul Japanese Grand Prix. The Italian is not considered a wet-weather specialist, but he reclaimed top spot with a 2:09.684 when he took the checkered flag at Mobility Resort Motegi, leaving him 0.081s ahead of Honda Team Asia’s Mario Aggi and 0.220s ahead of Andrea Rivacold Minho from Snipers Team. However, there was no change in the overall top 14 and it is Friday’s dry FP1 session that sets the starting order for Q1 later today.

“Rocket” does it in the rain

Foggia and Leopard Racing team-mate Tatsuki Suzuki were regularly at or near the top of the time monitor throughout the 40-minute session, which started with rain and was a wet track, despite the showers easing midway through the proceedings. Suzuki was the man to beat for the first 15 minutes or so and was the first to move the benchmark to 2:09s with less than seven minutes remaining. Foggia moved the mark to 2:09.860 in the final minute before the checkered flag, was usurped by Aji’s 2:09.765, then fought back on the very last lap. Mignot finished third in 2:09.904, while Suzuki finished fourth in the 2:09.909 mentioned above.

World Championship leader Izan Guevara (Autosolar GASGAS Aspar Team) was only 16th in the session but, unlike teammate Garcia, is locked in Q2. However, whether or not this will be an advantage depends on how the weather plays out – recent track experience could be valuable in the fight for pole.

Wet and not so wild

Despite the difficult conditions, there were relatively few incidents. Apart from a few excursions into Matega’s gravel traps, only three riders were seen to crash during the session, namely Taiyo Furusata (Honda Team Asia) at Turn 11, Elia Bartolini (QJMotor Avintia Racing Team) at Turn 5 and McPhee on the straight turn end at turn 3 – rider is fine.

So no change to the starting order for the first quarter, but a valuable run in the wet ahead of today’s session at 12:35 (GMT +9) – don’t miss it!

The best setup has become Apple for everyone

The Volvo XC40 Recharge SUV will be assembled locally, arriving later this year