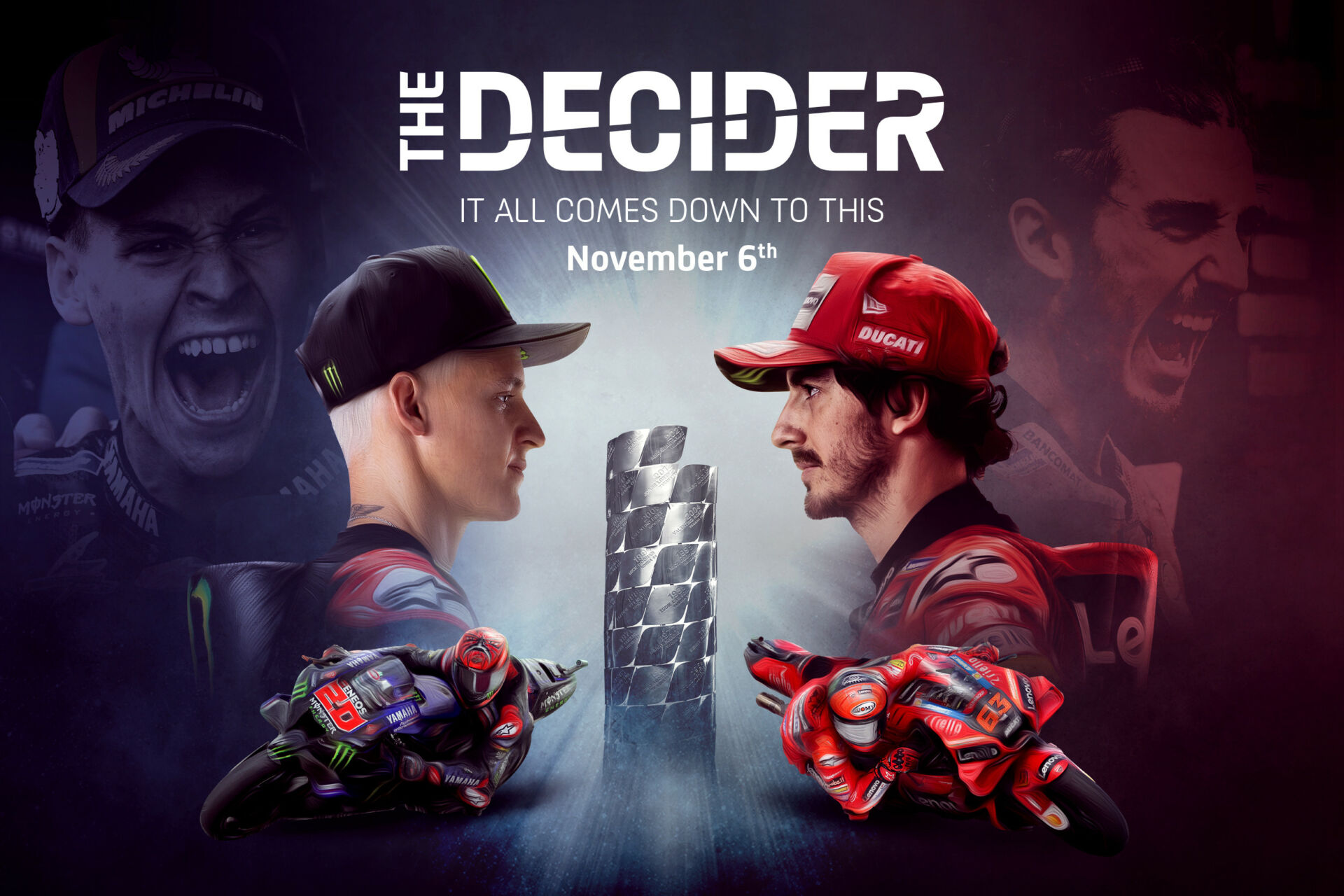 #TheDecider: It all boils down to this

Pecco vs. Fabio, Ducati vs. Yamaha: this is the final showdown

And so it begins. Last weekend of the season. The decider: two riders, one crown and an incredible year of highs, lows, thrills, spills, wins and losses. 23 points separate contender Francesco Bagnaia (Ducati Lenovo Team) from Fabio Quartararo (Monster Energy Yamaha MotoGP™) and it’s a simple enough equation for the crowd that the only thing Quartararo can do is win. If he doesn’t, Bagnai won’t even have to finish, such is his advantage, but this is motorcycle racing. It’s not over until the checkered flags fly (just ask 2006.)

In the red corner, Banya has a staggering seven wins and overcame a deficit of 91 points and has 23 points. He broke more than a few records and is on course to become the first Ducati rider to win the crown in 15 years – something that would also give the Bologna factory a triple crown among constructors, teams and riders. He won in Valencia last year on a historic day for Ducati when they locked up the podium, so the circuit will not be an unwelcome place for a decider. But that was then, and this is now – history beckons with open arms. No longer a chase, Banya is now a hot seat racer.

In the blue corner, Quartararo’s year was very much a study in consistency. A few mistakes, a few impressive wins and, as of late, being the only Yamaha to score constructor’s points every weekend all add up to an incredible season. A tough Thai GP followed by another zero points in Australia seemed to see things turn around, but El Diablo wasn’t done. As Sepang set up the first match point for his opponent, Quartarara pulled out a much-needed podium for his final stand, a stand he made as the fight continued. Valencia probably wouldn’t have been his chosen venue, but it was a solid venue for Yamaha… so with zero pressure now the weight of expectation has shifted to Banya, can Quartarara go out with a swing?

However, the decider does not exist in a vacuum. It exists in a network of the world’s fastest drivers and cars, each with their own targets to hit and glory to chase. Some of them also have loyalties. With Ducati’s history, the message, at the very least, is don’t come close to causing heartbreak at the last minute. And this message reaches a third of the starting grid: Jack Miller (Ducati Lenovo Team), Enea Bastianini (Gresini Racing MotoGP™), Johann Zarka (Prima Pramac Racing), Jorge Martin (Prima Pramac Racing), Mark Beczek (Mooney VR46). Racing Team), Luca Marini (Mooney VR46 Racing Team) and Fabio Di Giannantonio (Gresini Racing MotoGP™).

Some, like Zarka, have already said they are keeping the risk under control. Some, like Martin, said it wasn’t much of a deal with him, which probably read, “I’ll make a decision.” Miller was already the hero of the team and the constructor, and a cheerful chatter with a teammate to make Bagnaia feel confident on the wet road. Meanwhile, Bastianini continues to look into the camera with a slight smile and raised eyebrows, leaving many to wonder how the Italian will react to the crucial encounter.

Ducati, for its part, have been vocal about the fact that no orders were sent to the team or constructor until this point in the battle. Banya also stated that he wants to win on the track, not on orders from above. And amid all the talk of a deliberate desire to create months of puppetry of the Borgo Panigale factory, the results really speak for the riders being able to #GoFree: Miller’s wins and podiums ahead of Pec, Bastianini’s challengers to his compatriot. The order not to jeopardize the history in the making might just be another way of saying, “Don’t do anything stupid,” and it’s just common sense. We will find out on Sunday…

For Quartararo, meanwhile, the Allies have fallen a bit behind this season. However, team-mate Franco Morbidelli (Monster Energy Yamaha MotoGP™) took a step forward at Sepang in terms of speed, and he has previously tasted glory on the track. But what about the rest of the field? Aleix Espargaro (Aprilia Racing) is now out of contention and looking for much more as the pack heads back to Europe, as does team-mate Maverick Viñales, with Brad Binder (Red Bull KTM Factory Racing) not even mathematically out of contention for a top-five finish best overall this season, such is the South African’s record for Sunday heroics and consistency.

There are plenty of other names who also have little to lose in an all-out attack, as well as those who will face their last tangos in 2022. Alex Rins (Team Suzuki Ecstar) and teammate Joan Mir, the last winner in Valencia, will be keen to leave the Hamamatsu factory on a high. Cal Crutchlow (Yamaha RNF MotoGP™) will once again sit out the competition as team recruit Darrin Binder also prepares for the final dance on the road to Moto2™. Alex Marquez (LCR Honda Castrol) switches from Honda to try Ducati, while Pol Espargaro (Repsol Honda Team) switches back to Austrian machinery. Remy Gardner (Tech3 KTM Factory Racing) heads to WorldSBK as team-mate Raul Fernandez switches factories and Miguel Oliveira (Red Bull KTM Factory Racing) says goodbye to KTM. Miller is doing the same with the Ducati and it speaks well for the Australian that it hasn’t made headlines ahead of such a pivotal weekend for the Borgo Panigale.

Last but not least, we have not forgotten him. And neither should the rest of the network, the heroes of #TheDecider and the fans in the stands. Marco Marquez’s horn (Repsol Honda Team) must be sounded before each anti-clockwise track. That’s a requirement given the incredible record of the number 93. And it may have been very difficult to recapture that glory of late, but Marquez already has a pole and a podium since his return – a return with time on his side as each new race and week adds little more strength to his recovery. Can the eight-time world champion grab the headlines this weekend? It would be very difficult to throw down the gauntlet ahead of 2023 when Marquez has his eyes set on more than just the occasional prize.

You don’t want to miss this! #TheDecider comes to town from Thursday as the festivities begin, Friday is the first touch and Saturday is followed by the grid for the key meeting. Tune in to see it go down in the history books from 14:00 (GMT +1) on Sunday when the lights go out for the last time in 2022, ahead of a new era of the FIM MotoGP™ World Championship. Will this be a new era under a new Champion? We’re about to find out…

Fernandez vs. Ogura: There can only be one

The Moto2™ World Championship is on the line, with two contenders fighting for one crown

At that time, the crash in Australia for August Fernandez (Red Bull KTM Ajo) was decisive. But fast forward to the final lap in Sepang and Ai Ogura (Idemitsu Honda Team Asia) definitely got the better of the Spaniard in a way he will probably still regret. And so we enter the final round with Fernandez’s name in pencil on the cup, 37 9.5 points to no point, with 25 to go.

Both had incredible seasons and would deserve the crown, but it won’t work once the lights go out. There can only be one, and here’s how anyone can do it:

He finishes on the podium

He finishes 10th, 11th or 12th and Ogura doesn’t finish on the podium

He finishes P15 and Ogura is no better than P6

He wins and Fernandez does not finish on the podium

He ranks 2nd and Fernandez is no better than 6th

He is ranked 3rd and Fernandez is no better than 10th

He finished 4th, while Fernandez was no better than 13th

He is ranked 5th and Fernandez is no better than 15th

He finished 6th and Fernandez failed to score points

Add the likes of Alonso Lopez (Beta Tools Speed ​​Up) who is looking to maintain his lead in the Rookie of the Year rankings, win that title and win another race against Pedro Acosta (Red Bull KTM Ajo) who is looking to fight back, Aron Canet (Flexbox HP 40) looking for his first win in the intermediate class, Jake Dixon (Inde GASGAS Aspar Team) the same and Tony Arballino (Elf Marc VDS Racing Team) in the shot… you’ll definitely want to join us on Sunday at 12: 20 (GMT +1) for the final Moto2™ showdown of the season!

Izan Guevara (Valresa GASGAS Aspar Team) has one last chance to sign up for 2022 with a win before new adventures next season, but the race for second place is set to try and stop him. Sergio García (Valresa GASGAS Aspar Team) leads it as it stands and wouldn’t you know it, the Ricardo Tormo track is something of a special track for the number 11. From the junior categories to the World Championship, it’s a place where he’s built some serious fame .

However, Dennis Foggia (Leopard Racing) is within striking distance to try and grab the final spot, while Ayumu Sasaki (Sterilgarda Husqvarna Max) is more dependent on what is happening around him to see where his final position is year However, the Japanese rider has been the most consistent alongside Guevara for some time – and anything can happen in Moto3™.

Tesla is running on a smaller and cheaper EV platform