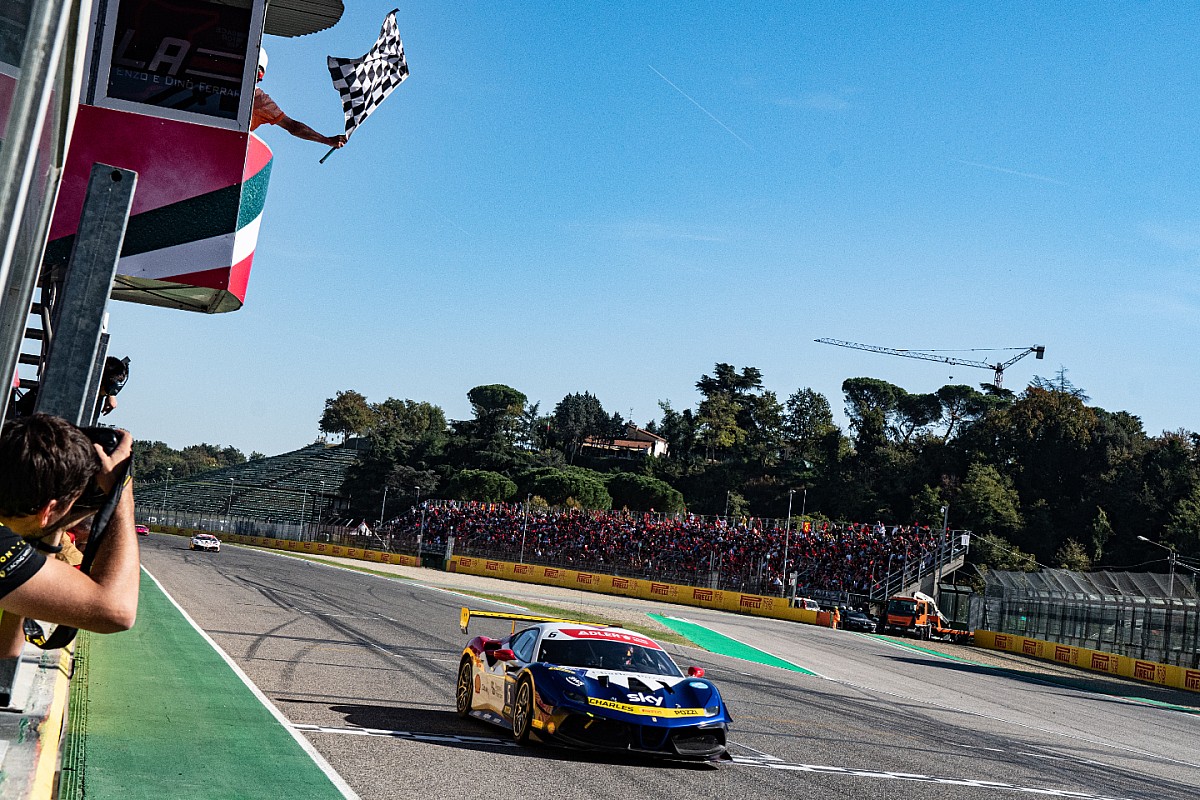 The final event of the 30th anniversary Ferrari Challenge program at Imola was the Trofeo Pirelli World Final, which with 35 cars going round at Tamburello promised to be an exciting race, but nerves got the better of everyone at the start, which was complete chaos and the safety car immediately came out.

Pole Thomas Neubauer (Charles Pozzi-Courage) shared the first row with 17-year-old Italian Eliseo Dono (CDP-Best Lap), but this time he was not caught and immediately took the lead. Manny Franco (Ferrari Lake Forest), who was seventh on the starting grid, was forced to lie on the grass for the first 200 meters of the race, losing several places in the process, but it was even worse because before everyone arrived at Tamburello, Max Mughelli (CDP Eureka Competition), Dylan Medler (The Collection), Yudai Uchida (Rosso Scuderia), Niccolò Rosi (Kessel Racing) and Ange Bardet (Cotes d’Azur Cannes) came into contact with each other and were all forced into retirement.

Twelve minutes later, the race was restarted and Neubauer was back in the lead, with Donna giving the impression that he was capable of a two-way battle for victory. Unfortunately, his dreams of victory ended on lap 9 after the front left suspension on his 488 Evo gave way after two numerous trips over the curbs, and he parked the car at the Gresini Curve.

At this point, the leader, who had a good gap to John Wartick (FML D2P) in second place, had an easy run to the flag. The European runner-up made a last-ditch effort near the end, but Neubauer took the checkered flag by more than 2 seconds to complete his 2022 season.

One of the favorites, Dorian Pin (Scuderia Niki-Iron Lynx), had a bit of an unpleasant weekend at Imola. After dominating the season with nine wins, the European champion had to settle for last place on the podium, but never looked like she had the pace to trouble the leading duo.

Luca Nurmi (Formula Racing) finally succeeded in his fight for 4th place, World Champion and ex-Formula 1 driver Adrian Sutil (Gohm Motorsport) put up a great fight. With a few laps to go, they were practically side by side all the way from Villeneuve to Acqua Minerali, but the young Finn found a gap that allowed him to beat Sutil.

Challenge North America’s top rider, Jason McCarthy, finished a little further back in sixth, and this final race of the season also saw a World Champion in Marco Pulcini, whose P7 finish meant he won the AM class title. .

The Italian dominated his category as runner-up Nigel Schundervoord could only cross the line in 11th place, more than 8 seconds behind. Third place on the podium went to Christian Brunsberg (Formula Racing), Pulcini’s closest rival at the weekend, while Nobuhiro Imada (Rosso Scuderia) was the first contender for the flag in the Asia-Pacific region in 13th.

The 2022 Mercedes-AMG SL63 reconnects with its fan base

Fruehauf is returning to the US producing trailers in Kentucky