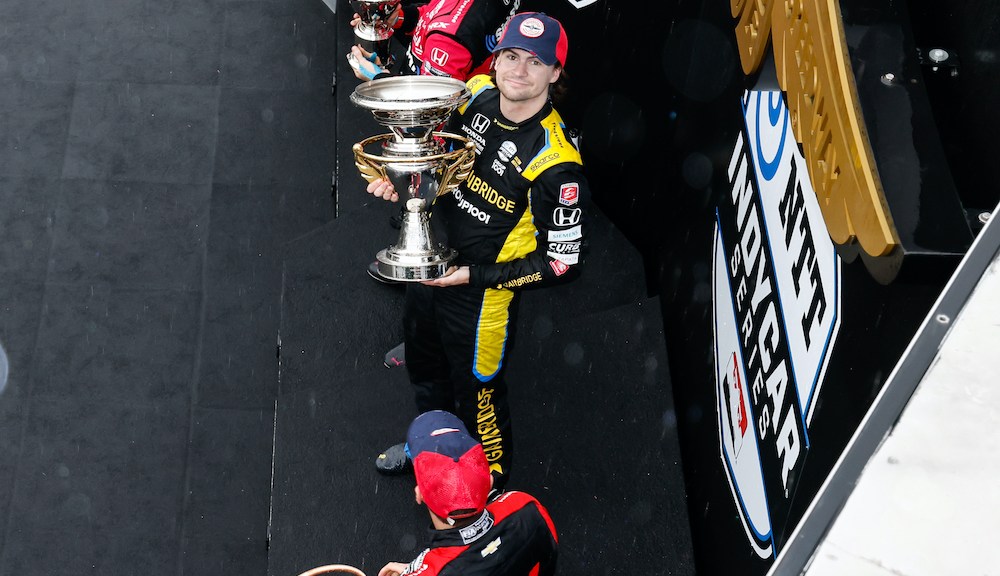 With a quick turnaround between the Indy GP and the start of the Indy 500 practice at 9am on Tuesday morning it will be a shorter than usual immersion in analysis and reaction after the race.

IndyCar Vice President of Communications Dave First went to the media center a few hours after the checkered flag waved, and smiled wryly as he read aloud the statistics of the passing flights in the table:

There were 471 passes at GP Indy. The previous record was 269, set at the August GP Harvest.

There were 362 passes per position, with the first also receiving 190 since last August. And 142 passes were executed inside the top 10.

I loved racing in the rain on my Formula Ford. I loved doing teams when it was raining. And I certainly enjoyed the long-awaited rain for the IndyCar race. I don’t know why, but it seems like a quarter of NASCAR races are delayed with rain, and yet, on our part, we’ve been more than two years since the skies opened on the IndyCar race.

We can’t control the weather, but if we could, I would have participated in at least two races with rain a year on the tracks for the exact reasons we saw on Saturday. Wild changes of fate, major strategic challenges that either blew up the race in a good way or led to the opposite result, and eight warnings that created an insane amount of opportunities for passes and failures on restarts. Whether it’s rain or a bunch of restarts, both can turn a regular race into something spectacular. Combined they make an instant classic that was absolutely insane.

The AMR security team earned a day to pamper themselves on Sunday with breakfasts and lunches, massages and whatever they wanted, after they tended to countless incidents during a frantic two-hour race.

We were lucky that no significant accidents occurred at the end of the race when rain and splashes coming out of the cars blinded the drivers who were running nearby. Colton Hertha thought the problem with the front of the airscreen covered in water and dirt would be the same if a halo was used or if there was nothing, but that doesn’t change the fact that IndyCar has some work to do on the eve of the next wet race .

Visibility was good until the drivers really wanted to see where they were going. Brett Farmer / Images of motorsport

First, I’m not sure if the changes have occurred, but I was very shocked to hear Run DMC and A Tribe Called Quest play through the IMS PA system. Second, of all the things I expected when I returned to speedway after a three-year absence, the hip-hop golden era was not on the list.

Saturday morning’s Run DMC song “It’s Tricky” was unfolded, and the song came to mind after the race when Coltan Hertha told RACER that he was carrying out his plan start of the race) secret without revealing it until the last moment on the radio. Fearing others would follow suit, Hertha waited until the last minute to tell his Andretti Autosport team at number 26 that he was heading to boxing on the third wheel to exchange rain tires for brand new spare ones.

A bold call shifted Hertha from P15 to P1 after the other 26 riders did the same on the fourth and fifth laps. By then Herta was in control. Sometimes the best strategy is to avoid disclosing your strategy and using the element of surprise to your advantage.

It’s nice to see so many IndyCar fans taking the Ed Carpenter Racing charity with Chevy No. 21 Rinus Vikey on Indy GP. At the top of the left and right side bases were hundreds of names during the event, with each name representing a $ 75 donation to Building Tomorrow. According to BT, “we have raised $ 55,000 to help enroll 4,000 more children in our reading and math program in rural Uganda, which will help improve literacy and numeracy in a country where only 6% of fourth-graders can read a simple paragraph.”

I’ve had quite a few people tell me that AJ Foyt Racing has funding issues, and Chevy under numbers 11 and 14, sponsored by Rokit, may be in danger of ending the season. Speaking to team president Larry Voight before the race, he offered a succinct and devastating response: “I’ve also heard some of these rumors, but we’re fine.”

Racers and employees of NEXT GEN

IMS hosted about 300 students, mostly colored children, from nearby schools and a club for boys and girls who learned about various professional opportunities in car racing and Roger Penske’s “Race for Equality and Change” program.

More than 300 children from local @IPSSchools and charter schools got acquainted with the races today and heard from such incredible speakers as @edwelburn, @bethparetta and more in the race for equality and change.#INDYGP | # This is May pic.twitter.com/7FbsWnVb6c

The initiative of Force Indy team leader Rod Reid to race on NXG cards also took place during the GP, where some talented children and many proud parents and families welcomed their sons and daughters. After that, Reed, Roger Penske, Rob Dyson, IndyCar team owner Beth Pareto, Force Indy Indy Lights driver Ernie Francis Jr. and other dignitaries spoke to the group and shared tips and encouragement to continue to progress in the sport.

* Unusual errors from Alex Palou. On a day when it seemed like every driver had at least one adventure on the turn or off-road, Palu wasn’t special, but that doesn’t change the fact that we just don’t see him no. 10 Honda sitting back to front. grass or in a wall elsewhere in all cases except the rarest. At the start of the race there was a moment when the former championship leader dropped to fourth place in the standings, but after Joseph Newgarden and Scott McLaughlin had their own problems, Palu was saved and dropped only to second place after new leader Will Vlad. 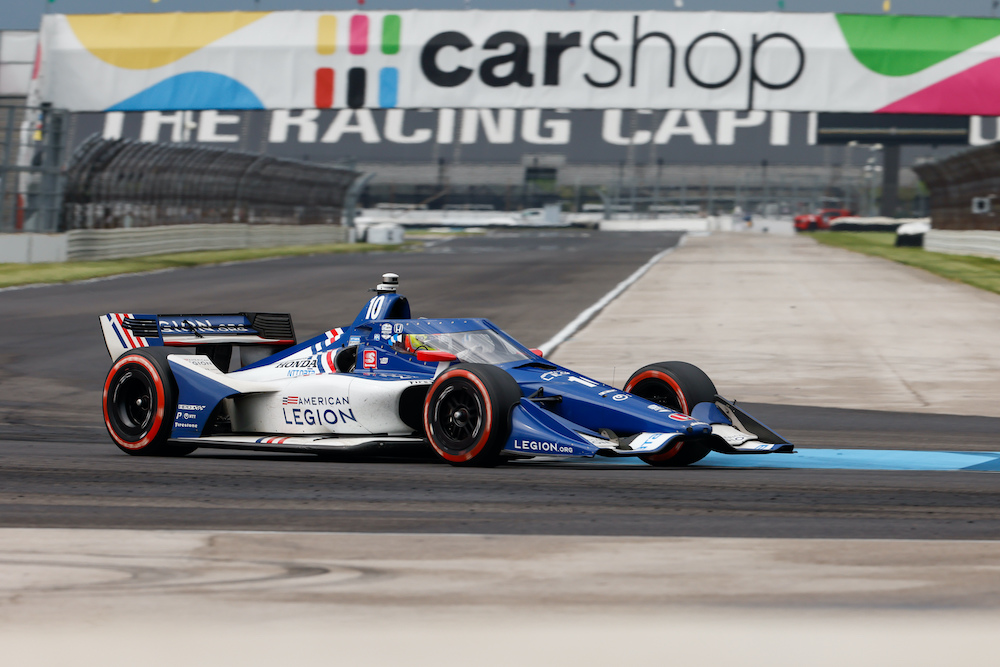 An unpleasant weekend from the reigning champion, but he was hardly alone in that regard. Brett Farmer / Images of motorsport

* Juan Pablo Manto arrived with a blast of hair on his head, and after complaining about the high temperature in his helmet he decided to trim the salt mop. A call to mutual friend Steve Schunk gave the resource to solve the problem, and on Friday night JPM cut the hair of Tracy Brown, a 40-year-old barber from Robin Miller! Who would have thought … “Monterior”, who sits in the same chair as Miller, to adjust fashion … I don’t know why, but this one tickles me.

* Photographers reported seeing lightning minutes before the race and during the Indy GP. Another worrying case, which fortunately did not go wrong.

* Staying with the image of points entering the Indy 500 with double points, the Indy GP saw more top riders retreat than anything else. Hertha was the only exception when he jumped from 11th to fifth. Pata O’Ward dropped from fifth to seventh after a hard end to the day. The same goes for Rinus Vikey, who changed seventh place to 10th. Graham Rahal rose from 10th to 12th, and Rossi fell from 13th to 15th. And while it’s deep in the pack, Conor Daly’s great play moved him from 19th to 16th.

* The good work of Tatiana Calderon of Voight, who was awarded 15th place in the race, her best result to date, after riding in her own, and her teammates did everything but did not cover themselves with glory.

* A similar note for Takuma Sato of Dale Coyne, who received an excellent seventh – his second top 10 for the team in five races – and climbed to 13th place in the standings, just behind former teammate Graham Rahal.

* Following Rahal’s command, Graham was twice struck in the same corner from Ramen Grosjean to Barbera. Grozhan received a good three or four shots in one corner from Jack Harvey of Rahal. Let’s hope the nonsense back and forth stopped later.

* A number of stakeholders have expressed interest in supporting USF2000 driver Miles Rowe, about whom we wrote last week. One IndyCar team owner offered to attract his sponsors, a former IndyCar driver who has ties, said he would present some funding options for Rove, and suggested the Captain could continue to help the three-time race winner keep his season alive after running out of his budget. last weekend.

* Arnie Sriben of IndyCar was very kind to keep my little disco ball, which I used for years on the RACER table at the IMS Media Center. Not only was this waiting for me when I arrived on the track on Friday morning, but thanks to a great IndyCar fan named Jim Debosik I was given a laminated figure of our late hero Robin Miller to hang from the mirror in my rental car. I thought it would be better as a topper for a disco ball, so we have Miller – Miller … walking around … turning the bird over and telling us what he thinks of us, just like he did all these years.

Thanks for sticking last weekend. We will be on gas by the end of the month!

Giulia Chicone solos to the Giro d’Italia, victory in the 15th stage