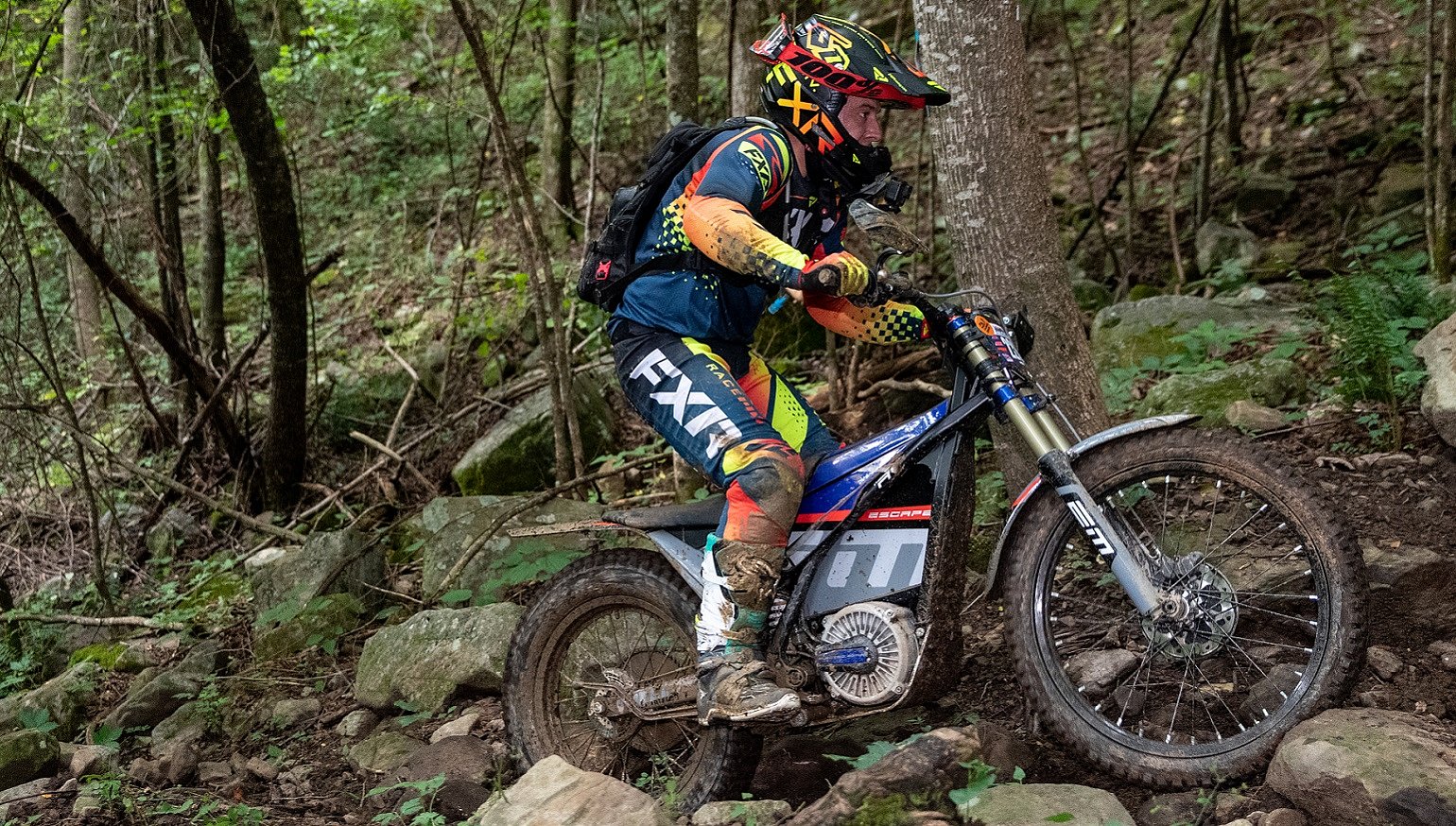 Boulders the size of Volkswagens, creek beds smoother than ice, hill climbs as steep as rocks—brutal enduro pits riders and cars against terrain so rough it would be difficult to walk, let alone drive over. motorcycle, and in the United States, the Red Bull Tennessee Knockout (TKO) is the crown jewel. The race is both a test of the rider’s skill and a masochistic display of pain and suffering. Sounds like fun, right?

As a fan of electric motorcycles, I had spent the previous year, together with TKO founder Eric Peronard, brainstorming ways to incorporate electric bikes into the event. We chose an all-electric class called ECR eMoto, an open class for 40 riders where the only restrictions were a minimum rear wheel size of 16 inches and a minimum age of 16. The ECR eMoto class will compete on the same grueling 11-mile course as other amateur racers with more than 400 entries in the fossil fuel TKO Race 1.

Among the traditional gas bikes, with decades of research and development, there are specialized bikes for the different disciplines of off-road racing, which are becoming more focused and focused every year. Since electric motorcycles are in their infancy, the offerings aren’t as obvious and plentiful. When it comes to electric motorcycle design, it feels like the Wild West, and the bikes are a direct reflection of that. Manufacturers often use a mix of off-the-shelf and proprietary parts, resulting in bikes that blur the lines of what we think of as “traditional” categories. This makes the innovation new and exciting, but it also creates real confusion when it comes time to classify these machines.

When I was deciding which bike to ride in the technical knockout, I found myself in the middle of this confusion.

Fortunately, I had a stable of four electric bikes to choose from. The bikes on my short list were the KTM Freeride E-XC, Sur Ron Lightbee X, Talaria Sting and Electric Motion Escape R.

Sur Ron Lightbee X and Talaria Sting are virtually indistinguishable in design. These are ultralight Chinese electric bikes that deliver six kilowatts (eight horsepower) from replaceable 60-volt batteries. The bikes come standard with 19-inch front and rear wheels, mated to mountain bike suspension and controls. They stand out for their lightweight shape of up to 130 lbs. These bikes have become hot rods in the electric motorcycle world and are highly modified by riders to suit their needs. I knew that the jumpy Sur Rons and Talarias would arrive for the TKO in full force, so I ruled out my bone stock candidates.

Next on the shortlist was the KTM Freeride E-XC. I have spent quite a few hours on this bike and have always found it to be a strong contender for enduro riding. Born on the chassis of KTM’s 250cc Freeride two-stroke, the E-XC puts out 18kW (24.5hp) of peak power through a 260-volt, 3.9kWh battery. The suspension is the same as the KTM 85SX, with a WP 43mm fork and WP PDS shock. ​​​​​​​While the KTM feels light and loose when riding, you feel all 245 pounds of this machine when it goes rubber-side up the rocks. Knowing that I would run into this scenario many times in this race, I also ruled out the orange bike. Not to mention I need to charge my bike’s battery a few times over the weekend and the Freeride E-XC comes standard with a 220 volt charger. This can prove problematic as the only charging options are limited to a generator or solar inverter.

In the end I chose the Electric Motion Escape R as my technical knockout weapon. The EM Escape R is an electric trail bike fitted from the factory with Michelin X11 trail tires, a low 32.2″ seat height, a short 52″ wheelbase and a total weight of 187 lbs. The Escape R takes strong inspiration from its trials-oriented cousin, the Epure Race, albeit with a larger 2.7kWh battery and a seat to match.

The Escape R comes with Tech Racing’s 39mm telescopic fork and R 16V shock, equipment suitable for slow trials but weak at higher speeds. What it lacks in suspension it makes up for in hydraulic clutch. That’s right. I said hydraulic clutch. This was a key factor in my decision to participate in the European Championship. In the world of electric motorcycles, a clutch is a rarity. Clutches add weight and complexity. Considering the large and instantaneous power that electric bikes produce, a clutch is often considered unnecessary for most applications. But Red Bull TKO isn’t most apps.

Novice in tough enduro on a technical knockout

Now is a great time to mention that I am an amateur racer and a total newbie to hard enduro. I’ve done enduro and hare scramble races before, but this was my first hard enduro race. My expectations for this event were to have fun and just survive. Of course, the competitiveness would be the icing on the cake, but I didn’t expect it.

We started with a one mile prologue time trial. This hot lap time determines your starting position for the next day’s main race. I set out with plans to take it easy, learn some lines and log a few more minutes on this bike that I barely rode at that point. That plan went out the window when I reached the first creek bed. In 100 feet I passed about six gas powered motorcycles and the sharp devil sitting on my shoulder told me to go as hard as my couch potato would allow.

The solution turned out to be effective. I finished my hot lap fourth fastest in the eMoto class and got the chance to line up for the ECR eMoto main race on the front row of six riders.

The start of the TKO course is a series of horizontal telephone poles, metal pipes and massive concrete blocks strategically placed to remind riders that this is no ordinary enduro. I managed to get through this section with relative ease and, as luck would have it, the other five riders in my row took a bad line, and I found myself at the front of the pack as we exited the start straight. Time to see what the Electric Motion Escape R can do.

The course quickly sent riders into a section called Sawmill Creek. It’s a slippery, rocky creek bed where riders choose their lines wisely, and it’s a direct reminder of why I chose the Escape R. The bike handled this challenging terrain like a precision tool. Despite the smooth rocks providing minimal grip, the connection the EM provides is incomparable to most bikes I’ve ridden. I chose to ride the bike in two-out-of-three power settings, which provided a smooth, linear power delivery that felt quick enough to accelerate quickly, but not so much that it was overwhelming.

As effective as the hydraulic clutch was, it felt like more of a security blanket than anything else. I find myself using the clutch when I probably shouldn’t, which I suspect is the result of old habits dying hard. However, when I needed to cut the power quickly without sacrificing momentum, the clutch engaged, well, the clutch. Also, in cases where I wanted to use a “splash technique” where the rider is essentially hurtling through an obstacle, revving the bike and releasing the clutch for that burst of acceleration proved to be effective.

The Escape R seemed to have the edge over the gas bikes in many ways other than chassis and suspension. As expected, the suspension shortcomings were the only area where I fell short on my trusty KTM 300 XC-W. A 48mm WP stanchion fork, WP PDS shock, and a big-sport-engineered chassis mean the KTM 300 is designed to run over some seriously tough terrain, and stick to it. By comparison, the EM’s 6.8 inches of front travel felt underpowered at speed. A lot of this rough terrain was being transferred to my body and it was really getting me down. I should mention that I barely had time to tune the suspension, but it felt soft, stiff and underpowered for this environment, which made me wonder how I’d feel aboard a bona fide two-stroke.

For a short period of time, the area was opened to several faster sections. That’s not the Escape R’s strong point. The bike hits its 46mph threshold quickly, and the combination of the steep head tube angle, short wheelbase and, again, light suspension makes it feel a little nervous at speed. To be honest, my fitness, or lack thereof, held me back far more than the bike.

A technical knockout tends to remind riders that this is no ordinary ride. These relaxing high-speed sections don’t last long, as the trail heads straight into the gnar. In the earlier chapters I wanted my 300 XC-W, but once exhaustion and the pump took full control of my race, I was grateful to be able to get on a light, single-gear electric bike with a low seat height. The Escape R instills a certain confidence that no matter what obstacle you’re about to tackle, the bike can handle it.

Emerging from the woods about an hour and 10 minutes after gate drop, we were directed down a twisty endurocross-style course that I can only assume was designed to entertain the fans, giving them a view of the riders suffering one last time. before crossing the finish line. At the finish line behind me, the Escape R’s display showed that the 2.7kWh battery still had an encouraging 48% capacity. On the other hand, if I had a meter in my body, its power would be much less than this.

The results of TKO 1 will show that electric dirt bikes do have advantages over gas bikes. While the Escape R finished a respectable fifth in the ECR eMoto class and 37th overall, ECR eMoto winner Sam Bird, also aboard an Electric Motion Escape R, finished third overall. Skeptics will say that the eMoto class had an unfair advantage starting at the front. ​​​​​​​However, this result means that 302 precision, highly developed enduro gas machines with decades of research and development finished slower than Sam. If that doesn’t show you how capable these bikes are in the right hands, I don’t know what will.

Yelp for carriers, Artemis launch delay and how LTL works

DICE “focuses only on Battlefield 2042” now, “no time” for other games

By March 2023, Ather Energy will double its retail network to 95 cities