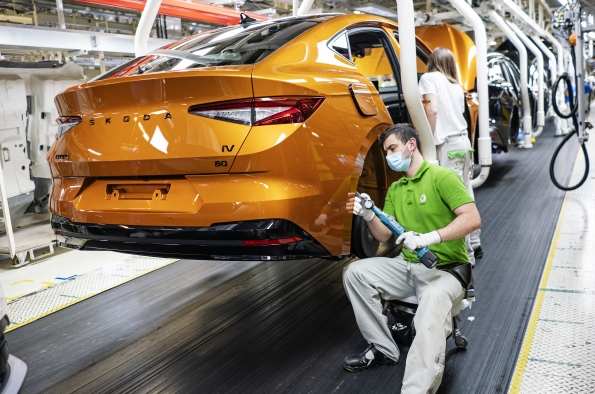 
As the Ukrainian crisis deepens this week, Skoda has said so is facing a critical shortage of spare parts from several suppliers from Ukraine and “will limit production of Enyaq iV from this week.” The Volkswagen Group’s global supplier network of more than 40,000 suppliers also includes a number of suppliers in Western Ukraine; Skoda from the Czech Republic looks particularly vulnerable. VW Group’s procurement analysts will work diligently to assess the rapidly evolving situation, quantify risks and find alternative strategies for finding important details. In addition to the uncertain magnitude and duration of possible supply disruptions, GlobalData’s global light car sales database also underscores the importance of the Russian car market for the brand. Data for 2021 show that Russia was the second largest market for Skoda after Germany. In Russia, Skoda produces Rapid, Octavia, Karoq and Kodiaq at two plants. In Nizhny Novgorod, Skoda produces three models – Octavia, Karoq and Kodiaq. Rapid is manufactured at the Skoda plant in Kaluga. Skoda said production at its Russian plants was still running, but added that “the impact of possible supply chain disruptions is constantly being analyzed.” In addition to problems with spare parts supplies, the immediate concern will be the impact of economic sanctions on Russia and the collapse of the Russian currency, which will reduce margins on any vehicles sold there, even if they may continue outside the inventory of finished cars. A longer-term concern for Skoda – and for the Volkswagen Group as a whole – will undoubtedly be the state of sales in Russia.

The situation unfolding in Ukraine will have a significant impact on the medium and heavy truck sector throughout the region, GlobalData commercial vehicle analyst Zita Zigan wrote this week. This has raised questions about the likely impact on the automotive industry. The Ukrainian market and the automotive sector will no doubt bear the brunt, but the effects are likely to be felt elsewhere in the region. Some of the variables that are likely to be affected immediately are critical to the demand for trucks in the region, such as oil and gas prices, because rising TCOs (total cost of ownership) are putting downward pressure on demand. Russia’s position as a major supplier of energy, minerals and other raw materials means a further risk of disruption of already tense supply chains, which will lead to negative consequences for production and industrial production, which is a key factor in demand for freight. Air, road and rail freight flows have already been affected and are exacerbating deficits in car production in some places. The combination of impending sanctions, inflation and oil prices has led to a sharp fall in the ruble – and the confidence of European investors – just as Kovid’s worries began to recede. The collapse in investment, as happened in the CIS region in 2015, will deal a severe blow to capital goods such as trucks.

This week, the company VW Group warned that due to the current situation in Ukraine, it may be supply chain failures. This could lead to adjustments in production in certain groups, the company said. Group purchases are also “conducting intensive exchanges with relevant suppliers and considering alternatives,” the company said. Skoda assembles cars in Ukraine from SKD kits – Superb, Kodiaq, Karoq and Fabia Combi – in cooperation with Eurocar. Now production is suspended at the Solomanov plant, where all products are intended only for customers from Ukraine. In terms of sales risk, the Russian market is one of Skoda’s most important markets worldwide, the second largest in 2021 with 90,400 cars delivered. Ukraine was also a stable market with sales of about 6,000 Skoda cars a year. Since 2002, about 190,000 have been produced in Ukraine.

Tesla plans to build China’s second electric vehicle plant to help it keep pace with growing demand in both local and export markets, reported in China citing sources close to the company. The electric vehicle manufacturer (EV) is said to plan to double capacity in China to at least 1 million cars a year in the short term, and a second plant will be built next to an existing plant in the Lingang Free Trade Area in Shanghai. Other reports suggested that this would be the only next step in Tesla’s long-term plan to produce 2 million cars a year in China to increase the company’s impact on the country’s fastest growing EV market. According to the China Automobile Manufacturers Association, sales of new energy vehicles (NEVs), which mainly consist of electric and hybrid vehicles, rose 157% to a record 3,521,000 units in China in 2021, or 13% of total car sales in the country. (CAAM). Battery-powered electric vehicles totaled 2,990,000 units. The government recently lifted its goal to make NEV sales account for 40% of total car sales by 2030 and 60% by 2035 before internal combustion vehicles are completely decommissioned in the 2040s. This will enable global EV manufacturers to grow significantly.

Still in China – IM Motors, a joint venture between Chinese automaker SAIC Motor, e-commerce giant Alibaba and Shanghai’s Zhangjiang Group. this week launched mass production of its first model at its plant in Shanghai. The company, established in 2020 with an initial investment of 10 billion yuan ($ 1.6 billion), focuses on the development and production of premium electric vehicles (EV). It is controlled by SAIC Motor, which owns 54% of the shares, with Alibaba and Zhangjiang owning 18% each. The joint venture seeks to combine SAIC Motor’s expertise in car manufacturing with Alibaba’s big data and artificial intelligence power, which it sees as an advantage over competitors. Sales of new energy vehicles, consisting mainly of electric batteries, rose 157% to 3.5 million units last year and are expected to grow to about 5.5 million in 2022. IM Motors unveiled its first model, the battery-powered Zhiji L7 sedan, at the Shanghai Motor Show in April 2021, and in December launched pre-production of 200 models to detect possible malfunctions. According to local reports, more than 60 body components have been identified that need further improvement.

This was reported by Panasonic plans to begin mass production of a new lithium-ion battery in Japan by the end of March 2024 to supply its main customer electric car (EV) Tesla. The Japanese electronics giant together with Tesla owns a plant of lithium-ion batteries in Nevada, which supplies batteries to the nearest GigaFactory 1 car manufacturer. Panasonic has said it will produce its latest lithium-ion battery in place of its former laptop and mobile phone. battery factory in Kinakou in Wakayama Prefecture, Japan. Reports suggested that the company chose the site because of the availability of skilled engineers, despite its remoteness from Tesla’s car plants, after it was difficult for it to recruit enough qualified staff for its existing plant in the United States. Last October, Panasonic introduced its new 4680 cylindrical battery, which has a diameter of 46 mm and a height of 80 mm – about five times larger than the cells it currently supplies Tesla. In addition to the fact that the new batteries will be cheaper to produce, they will also improve the power reserve. The company has said it will build two new production lines in Kinakov, and trial production of the first line should begin by the end of 2022. A separate report states that Panasonic plans to invest 80 nm JPY ($ 692 million) in the plant.

Have a good weekend.

Now there’s a trainer made entirely out of carbon dioxide emissions – and it...

Hyundai, Kia and Genesis will develop more models in Europe and for it

Pagani Zonda Revo Barchetta may be the craziest Zonda to date

Formula 1 is firmly committed to track restrictions, as suggested by Paul Ricard in...