Motonewstoday.com
Home Auto News The Honda CR-V Hydrogen Fuel Cell EV will be produced in the... 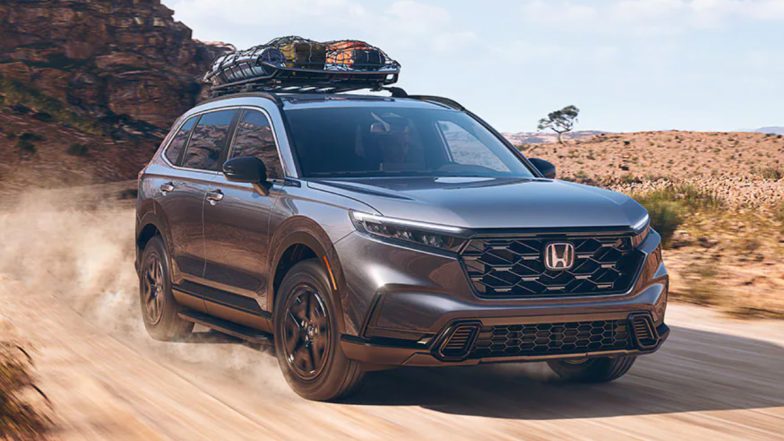 New Delhi, December 1: The Japanese car concern Honda is going to try hydrogen fuel cell technology again. Hydrogen fuel cell vehicle technology (Hydrogen FCV) has been one of the most researched automotive technologies in the last decade to create clean fuel vehicles of the future. However, this technology has faced major hurdles in terms of infrastructure and cost to make it a viable choice for a wide range of car buyers. Germany: The world’s first hydrogen-powered trains began serving passengers in Lower Saxony.

However, global car manufacturing giants like Honda, Toyota and other luxury car companies are still working on their hydrogen powered and electric powered cars to offer clean, green and mean machines on wheels. So, Honda is ready to create another vehicle with this future-ready fuel cell technology that will add charm to one of its best-selling models, the CR-V crossover.

The new fuel cell version of the Honda CR-V EV is scheduled to roll out of the Honda plant in Ohio, USA, from 2024. The CR-V CFEV will replace the Honda Clarity hydrogen fuel cell sedan, which went on sale in California between 2017 and 2020. The new CR-V fuel cell vehicle (FCV) variant will also come with plug-in capability to offer a limited all-electric range without the energy consumption of hydrogen fuel cells. The India-launched Honda City e:HEV Hybrid will be launched next month.

In terms of looks, the CR-V FCV will retain the looks and interior of the standard CR-V, barring minor styling cues such as trim, badges and an expected trendier lighting system to differentiate it from the standard version.

As for the powertrain, details are scarce at the moment. However, Honda will produce the FCV powertrain jointly with General Motors. The fuel cell powertrain, which basically converts liquid hydrogen into electricity to power the car’s electric motor, is said to be an improved version of the drivetrain that ran under the hood of the Clarity, using 80% less platinum.

The entire fuel cell power unit will be mounted entirely under the CR-V’s hood, similar to the Clarity, but the CR-V’s crossover SUV body shape will help it fit better without compromising its spacious interior. However, the liquid hydrogen tank will be installed in the trunk, which may eat up some of the cargo space.

Once on the market, the CR-V FCV will compete with the likes of the Toyota Mirai and Hyundai Nexo as the only hydrogen-powered vehicles available in the US auto market. Honda is expected to offer more information about its upcoming FCV model next year as it gets closer to the car’s production beginning in 2024.

(The above story first appeared on LatestLY on 01 Dec 2022 at 13:21 IST. For more news and updates on politics, world, sports, entertainment and lifestyle, visit our website Latestly.com).

LastPass is about to enter the metaverse

Three open requests for information from the US Solar Energy Technology Administration – pv...

Vehicles over 15 years old to be phased out in this state by year-end:...

The 2023 Honda Accord is growing, will offer 4 hybrid configurations