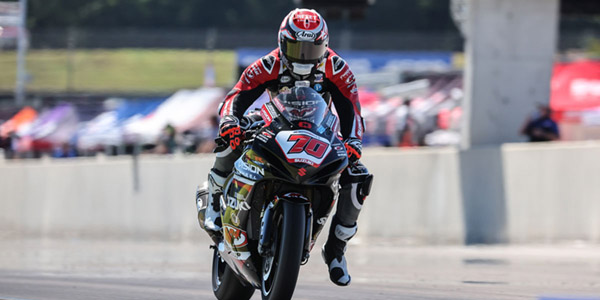 Vision Wheel M4 ECSTAR Suzuki’s Tyler Scott continued his meteoric rise to the top of the podium, competing in the toughest conditions imaginable to complete his first Supersport campaign.

Facing a wet but dry track, Scott charged into the first turn of the race in second on his wet-shod GSX-R750. Scott initially found himself outside the top five before building his confidence on the 2.38 mile course.

As the track continued to dry, the 16-year-old rookie picked up the pace and worked his way back up to third and closing in on second by the time he eventually took the checkered flag.

The result marked Scott’s ninth podium of his breakout season, including his debut win earlier in the year.

Scott, who finished the year in an impressive third place in the Supersport points standings, said: “I didn’t feel so good at the start of the race but the track started to dry out and I started to pick up more and more pace. I thought I could even finish second, but I just ran out of time.

“I want to say a big thank you to the entire Vision Wheel M4 ECSTAR Suzuki team for giving me the opportunity this year. I took full advantage of everything they had and it’s a great feeling to be on the podium in the last race of the year. I think I’ve learned a lot about bike setup this year working with the team. Everyone has been very helpful and I’m very happy with the progress I’ve made.”

Lohoff, who continues to struggle to regain form and fitness after a lengthy injury-enforced layoff, battled for the podium for most of the race before eventually earning an encouraging fifth place.

“It was a fun race, but it was crazy. I have often raced on a wet track, but never on a dry track with rain tires. Call it a learning experience, but I was happy to get fifth,” Lohoff said. “I was down to about seventh at one stage, but I came back through the field. I thought I was going to finish third, but I had no front wheel left. The left side of the front tire was completely gone and the steering wheel was moving back and forth even though I was on a straight line.’

Despite missing several races, the South African ended the season in ninth place with three podiums and five top-five finishes.

Liam Grant’s Third Vision Wheel M4 ECSTAR Suzuki Supersport had a more difficult time with these conditions. Grant took the risk of starting the race on dry tires, ultimately losing his position in the top 10 to 16th. The youngster ended his rookie Supersport season in 13th place with eight top-10 finishes, highlighted by a best finish of sixth.

Vision Wheel M4 ECSTAR The Suzuki Superbike duo of Richie Escalante and Jake Lewis finished the year in formation, taking the final checkered flag of the season in sixth and seventh respectively.

Rookie premiership Escalante made a late pass to his veteran teammate and finished the year with a promising sixth. The result marked Escalante’s 12th top-10 of the year, where he finished ninth in scoring with five top-fives, including a pair of fourth-place finishes.

“The start of the race was a little difficult,” said Escalante. “It was raining in the morning, the temperature was lower today and we chose a different tyre. Sometimes you have to take a risk, and at first it doesn’t work out. As the race went on I got stronger and was able to go faster and get better on the Suzuki. I’m happy with the year, I’m learning step by step from a great team. Now is the time to take what I’ve learned and train hard to prepare for next season.”

Lewis held sixth place over Escalante for most of the race. His seventh was his 15th top-10 finish. The Kentuckian finished the year in seventh place with three top-five finishes on the season, including a podium finish.

Insane Throttle Biker Episode 840 WOMEN USE THESE MOVES TO GET MEN – Insane...