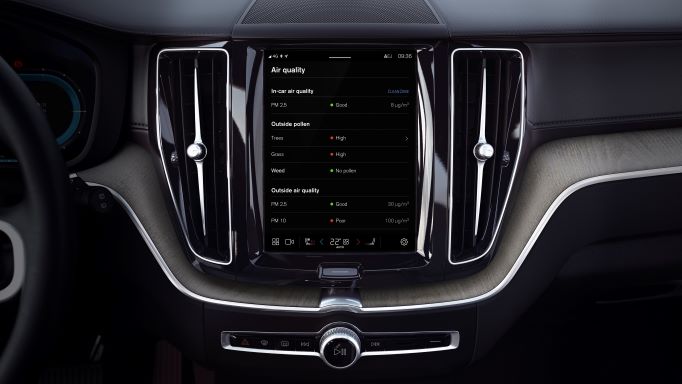 Most Volvo cars manufactured in the second quarter of 2022 have a display that shows the level of pollen on the street and the level of air quality on the central display.

“By regularly testing and improving the air purification functions in our cars, we can increase our competitive advantage by offering more comfortable and healthy driving,” the company said in a statement.

He also introduced the so-called “Advanced Air Purifier” for the 90 and 60 Series Certified Anti-Asthma and Allergy Standards (ASL), which removes up to 99.9 percent of grass, tree and weed pollen allergens from incoming air.

ASL is an independent certification program that helps consumers identify products suitable for people with asthma and allergies.

Maria Bernander, an “expert on the impact on passenger health,” says: “Studies have shown that cleaner air can help increase concentration.”

Cars equipped with the new air purification system also have a sensor that was launched in 2020 as the world’s first feature that measures PM 2.5 levels in the cabin and allows customers to compare them to the level outside.

PM 2.5 is a widely used indicator of air quality.

It is claimed that synthetic fiber-based filters and ionization remove up to 95% of all such particles from the cabin.

The results of recent tests conducted by the independent Austrian research and testing institute OFI have shown that the technology is very effective against airborne viruses.

Bentley Mulliner Batur debuts as the most powerful model in the history of the...

Mahindra is ramping up production to deliver 25,000 Scorpio Ns by the end of...

Hyundai will unveil the all-new Tucson SUV on Wednesday; here’s what to expect