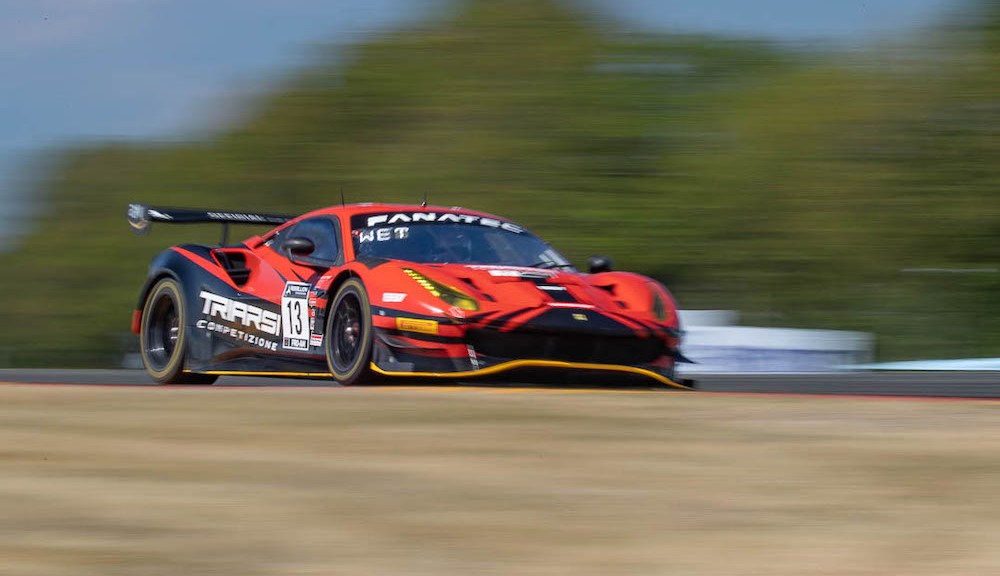 Justin Weatherill and Triarsi Racing came to Fanatec GT World Challenge America and GT America in a fairly typical way, via the one-make GT series, in their case the Ferrari Challenge. And as many drivers and teams do when making the jump to GT3, they stuck with what they knew by bringing three Ferrari 488 GT3s – two in GT World Challenge, a Pro-Am entry for Wetherill and Ryan Dalziel and a Pro-Am entry for Anofrio Triarsi and Charlie Scardini. Additionally, Wetherill is running a third car in GT America.

“We’ve done the Challenge program for a couple of years with Triarsi,” Wetherill said. “One of my goals was to help him build a program and get him back in the car. So coming and racing GT cars seemed like the next natural step for me. And Onofrio Jr. was also interested in joining and being part of building the team, so it was a good opportunity to help him take the team to the next level, and then we’ll continue to grow as drivers.”

Wetherill worked with Dalziel as a trainer in the Ferrari Challenge and, being a relative newcomer to the sport, his resources when it came to finding a professional co-driver to work with were not great, and Dalziel was a natural choice. It also helped that Triarcy is somewhat local to Dalziel in Florida, and Dalziel had not had the opportunity to work with a local team before. But mostly Dalziel saw potential. The pairing and the switch to GT3 quickly paid off, with Wetherill and Dalziel taking their first GT World Challenge America victory at VIR, and Wetherill followed that up with a GT America win in Nashville.

“Coming into a number of new programs, I think it’s exactly what I’ve been waiting for,” Dalziel explained ahead of the Road America rounds. “When I look back at some of the previous teams that I’ve been a part of since day one, it takes a few years for the K-PAX world to catch up. But I think things are starting to pick up in the last few races. We have good people with good cars, so we just try to do all the little things every weekend. We haven’t had a perfect weekend yet. Given the results we’re getting, the people here, there’s a lot of room for growth.”

Weatherill came to racing through his love of street cars. The company he founded, mobile repair shop uBreakiFix, gave him access to some high-performance road cars that led him to racing. After selling the company to Assurion, with whom he works as a consultant, he had the time and budget to begin delving deeper into the sport.

“We have a little less power and a lot more tires,” Wetherill explained. “It really boils down to much higher rolling speed and later braking. That’s a much higher load in this car than in the Challenge car. The Challenge car is an incredible piece of engineering, but it’s a little more so when that car is trying to go through a corner at higher speeds. So this led to an adjustment in management style. I drove the Challenge car with one foot, and I drive this one with two. These are small things and big things. But this car feels really planted and I still haven’t found its limits.’

“Justin only has one book of plays right now and that’s ‘The Challenge’ and that’s where he starts the next chapter,” added Dalziel. “Challenge is a really good starting point for these guys, but it’s still based on streetcars — skinny tires, streetcar ABS, straight-from-streetcar pedal boxes. There’s a lot of things he’s done really well and he’s been the favorite every weekend at the end of the Challenge, then he comes here and you feel like a complete newbie again.”

With the American Championship effectively clinched for Triarsi and Scardina, and a win in the books for Dalziel and Wetherill, it’s not bad for a first-year effort.

“If we stop now, I consider it a success,” Dalziel said. “We had great reliability. All this happened very late; it was originally a one-car team, with Justin and Jr. going to drive together. I was going to stay with DXDT and then he switched to a two car team to run the Pro-Am car. I think winning races in your first year, winning races in any year, is tough. So that’s something to look back on and be happy where we are. But at the same time, I’m happy that I think there’s a lot more potential here, and we iron out a lot of those wrinkles every weekend.”

Dalziel and Wetherill, along with the rest of the GT World Challenge America competitors, are back in action this weekend at Sebring International Raceway.

The GMC Canyon gets a high-quality AT4X off-road finish